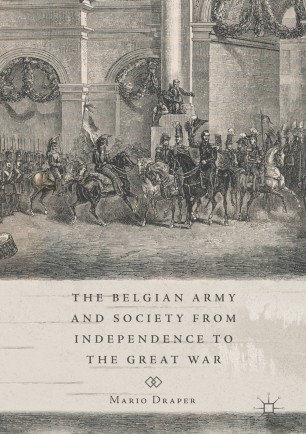 The Belgian Army and Society from Independence to the Great War

This book explores Belgian state-building through the prism of its army from independence to the First World War. It argues that party-politics, which often ran along geographical, linguistic, and religious lines, prevented both Flemings and Walloons from reconciling their regional identities into a unified concept of Belgian nationalism. Equally, it obstructed the army from satisfactorily preparing to uphold Belgium’s imposed neutrality before 1914. Situated uneasily between the two powerhouses of nineteenth-century Europe, Belgium offers a unique insight into the concepts of citizenship and militarisation in a divided society in the era of fervent nationalism. By examining the composition, experience, and image of the army’s officer corps and rank and file, as well as those of the auxiliary forces, this book shows that although military and civilian society often stood aloof from one another, the army, as a national institution, offered a fleeting glimpse into the dichotomy that was pre-war Belgium.

Mario Draper is Lecturer in Modern British and European History at the University of Kent, UK. His research focuses on the links between European armies and their parent societies in the nineteenth and twentieth centuries, with a particular focus on identity, nationalism, and citizenship.