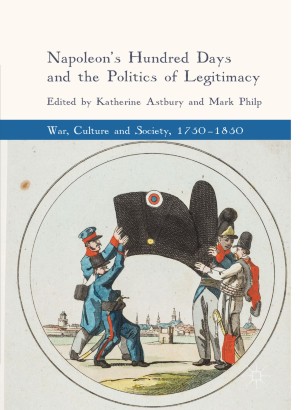 Napoleon's Hundred Days and the Politics of Legitimacy

This book examines the politics of legitimacy as they played out across Europe in response to Napoleon’s dramatic return to power in France after his exile to Elba in 1814. Napoleon had to re-establish his claim to power with initially minimal military resources. Moreover, as the rest of Europe united against him, he had to marshal popular support for his new regime, while simultaneously demanding men and money to back what became an increasingly inevitable military campaign. The initial return – known as ‘the flight of the eagle’ – gradually turned into a dogged attempt to bolster support using a range of mechanisms, including constitutional amendments, elections, and public ceremonies. At the same time, his opponents had to marshal their resources to challenge his return, relying on populations already war-weary and resentful of the costs they had had to bear. The contributors to this volume explore how, for both sides, cultural politics became central in supporting or challenging the legitimacy of these political orders in the path to Waterloo.

Katherine Astbury is Reader in French Studies at the University of Warwick, UK. Specialising in literary, theatrical and cultural production during the French Revolution and First Empire, she is the author of Narrative Responses to the Trauma of the French Revolution (2012) and a critical edition of Pixerécourt’s La Forteresse du Danube (2016). She has worked with a number of heritage organisations in the UK to bring their Revolutionary and Napoleonic collections and histories to new audiences, including Waddesdon Manor and Portchester Castle.
Mark Philp is Professor of History and Politics at the University of Warwick, and an Emeritus Fellow of Oriel College, University of Oxford, UK. Recent publications include Political Conduct (2007), Reforming Ideas in Britain: Politics and Language in the Shadow of the French Revolution, 1789-1815 (2013), and, co-edited with Joanna Innes, Re-imagining Democracy in the Age of Revolutions: America, France, Britain, Ireland 1750-1850 (2013).