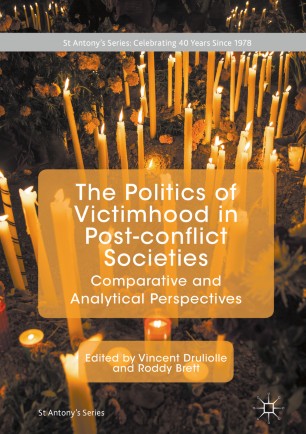 The Politics of Victimhood in Post-conflict Societies

This volume sheds new light upon the role of victims in the aftermath of violence. Victims are central actors in transitional justice, the politics of memory and conflict resolution, yet the analysis of their mobilisation and political influence in these processes has been neglected. After introducing and explaining the reasons for this limited interest, the book’s chapters focus on a range of settings and draw on different disciplines to offer insights into the interrelated themes of victimhood – victims, their individual and collective identities, and their role in and impact upon post-conflict societies – and the politics of victimhood – meaning how victimhood is defined, negotiated and contested, both socially and politically. Because it outlines a stimulating research agenda and challenges the view that victims are passive or apolitical, this interdisciplinary volume is a significant contribution to the literature and will be of interest to scholars from disciplines such as law, anthropology, political science, human rights, international studies, and to practitioners.

Vincent Druliolle is Assistant Professor in the Department of Social Sciences at Universidad Carlos III de Madrid, Spain. His work about the politics of memory and transitional justice in Argentina and Spain has been published in journals such as the Journal of Human Rights and the International Journal of Transitional Justice.

Roddy Brett is Senior Lecturer with the School of International Relations at the University of St Andrews, UK, where he directs the M.Litt in Peace and Conflict Studies. His research addresses political violence, peacebuilding and human rights. His latest book is entitled The Origins and Dynamics of Genocide: Political Violence in Guatemala (Palgrave Macmillan, 2016).