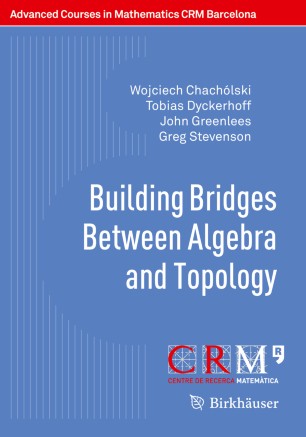 Building Bridges Between Algebra and Topology

This volume presents an elaborated version of lecture notes for two advanced courses: (Re)Emerging Methods in Commutative Algebra and Representation Theory and Building Bridges Between Algebra and Topology, held at the CRM in the spring of 2015.

Homological algebra is a rich and ubiquitous subject; it is both an active field of research and a widespread toolbox for many mathematicians. Together, these notes introduce recent applications and interactions of homological methods in commutative algebra, representation theory and topology, narrowing the gap between specialists from different areas wishing to acquaint themselves with a rapidly growing field. The covered topics range from a fresh introduction to the growing area of support theory for triangulated categories to the striking consequences of the formulation in the homotopy theory of classical concepts in commutative algebra. Moreover, they also include a higher categories view of Hall algebras and an introduction to the use of idempotent functors in algebra and topology.

Tobias Dyckerhoff is a Junior Fellow at the Hausdorff Center for Mathematics in Bonn, Germany.

Greg Stevenson is a Research Assistant at the Bielefeld University in Germany.

John Greenlees is a Professor at the The University of Sheffield in the United Kingdom.

Wojciech Chachólski is a Professor at the KTH Royal Institute of Technology in Stockholm, Sweden.