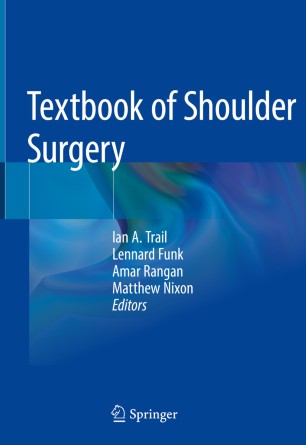 This textbook provides the most up-to-date information on shoulder surgery along with practical approaches for patient evaluation and treatments options. The book is divided into key sections, providing coverage on Soft Tissue Disorders of the Shoulder, Arthritis of the Shoulder, The Paediatric Shoulder and other miscellaneous topics relevant to treating this area. Its strong clinical focus will help residents and medical students to manage patients in a practical way, based on the most recent scientific evidence and the most effective surgical and non-surgical techniques. Thus, it will become a valuable reference and resource for young doctors and students looking to increase their professional skills and knowledge when treating shoulder injuries and disorders in clinical practice.

Ian A. Trail has been a Consultant at Wrightington Hospital for almost eighteen years and is currently the Senior Clinician and 'Head of Service'. He qualified from the University of Manchester Medical School in 1978, thereafter receiving training in the North West, Europe and the United States, the latter as a Fellowship at the Mayo Clinic.  He was appointed as a Consultant at Wrightington Hospital in 1991.

Not only is Prof Trail a Consultant at Wrightington Hospital, but he also practices at The Royal Manchester Children's Hospital and is a Senior Lecturer at the University of Manchester and the University of Central Lancashire. Nationally, he currently serves on the Councils of the British Society of Surgery of the Hand and the British Orthopaedic Association.  At the same time, he has been elected to serve as Editor of the Journal of Shoulder and Elbow.

Since 1989, he has published over seventy research papers and has delivered numerous national and international presentations.  He has been a guest lecturer to both the American and Indian societies of surgery of the hand. Currently he has authored two books on surgery to the hand and elbow. In 2015, his book Disorders of the Hand (Springer, 2014) was highly commended at the British Medical Association book awards.

Lennard Funk specialises in arthroscopic (keyhole) and minimally invasive surgery of the shoulder. His main interests include the management of shoulder dislocations, frozen shoulder, arthritis and sports injuries of the shoulder. He routinely treats elite athletes with a particular interest in shoulder injuries in rugby and contact sports, with a large experience in treating professional sports people. He holds a Professorship at Salford University and his NHS contract is at Wrightington Hospital. He is also a partner in OrthTeam and the Manchester

In addition to his surgical qualifications, Prof Funk is a Fellow of the Faculty of Sports Medicine UK and holds a BSc in Sports Physiology and an MSc in Orthopaedic Engineering. He is involved in developing and running postgraduate degrees for surgeons, therapists and sports clinicians in Orthopaedics. Prof Funk lectures nationally and internationally on Shoulder Surgery, Sports Injuries and Medical Informatics. He is published widely in medical journals and a member of many international and national professional organizations. He also trains other clinicians on shoulder ultrasound on regular courses and lectures internationally.

Amar Rangan is a Consultant Orthopaedic Surgeon based at the James Cook University Hospital in Middlesbrough. Having trained in trauma and orthopaedic surgery in the northern region of England, he has acquired specialist expertise in shoulder and elbow surgery.

He has helped establish a tertiary and specialist service in management of shoulder disorders which attracts out of area referrals from the whole of the northern region of England and Yorkshire.

He was appointed Professor of Orthopaedic Surgery at Teesside University in 2009. He continues to train orthopaedic surgeons in the subspecialty of shoulder and elbow surgery. Professor Rangan also trains GPs and allied health professionals by organising a master's level module in assessment and management of shoulder disorders at Teesside University.

He has considerable experience in clinical research and is currently Chief Investigator for a publicly funded UK wide multi-centre study of proximal humeral fractures. His other research interests include rotator cuff disorders and interventions for shoulder arthritis. He is chairman of the research committee of British Elbow and Shoulder Society. He also leads the Injuries and Accidents specialty group for County Durham and Tees Valley Comprehensive Local Research Network.

Matthew Nixon is a Consultant Upper Limb Surgeon specialising in adult elective orthopaedics and trauma as well as paediatric upper limb conditions. In 2000, he completed his qualification at University of Leeds followed by a training rotation at Leicester University which lead to a Clinical research fellowship in orthopaedics. In 2008 he became a specialist registrar in the Mersey region and in 2012 was appointed a Consultant Orthopaedic Surgeon. Mr Nixon currently works as a consultant at both at the Countess of Chester Hospital and Manchester Children's Hospital. In 2012 Mr Nixon edited the studyguide book Paediatric Orthopaedics for FRCS and has also written articles for numerous peer reviewed journals.