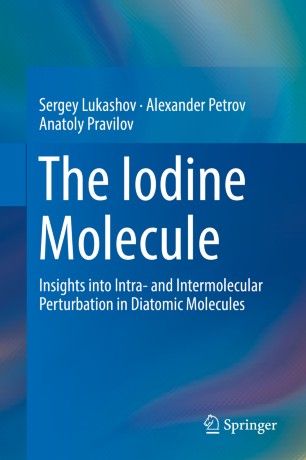 Insights into Intra- and Intermolecular Perturbation in Diatomic Molecules

This book presents experimental and theoretical spectroscopic studies performed over the last 25 years on the iodine molecule’s excited states and their perturbations. It is going to be of interest to researchers who study intra- and intermolecular perturbations in diatomic molecules and more complex systems.

The book offers a detailed treatment of the nonadiabatic perturbations of valence, ion pair and Rydberg states induced by intramolecular as well as intermolecular interactions in collisions or in weakly-bound complexes. It also provides an overview of current instrumentation and techniques as well as theoretical approaches describing intra- and intermolecular perturbations.

The authors are experts in the use of spectroscopy for the study of intrinsic and collision-induced perturbations in diatomic iodine. They introduced new methods of two- and three-step optical population of the iodine ion-pair states. The iodine molecule has 23 valence states correlating with three dissociation limits, 20 so-called ion-pair states, nestled in four tiers and a multitude of Rydberg states. All the states have different angular momenta, parities and very dense rovibronic levels. Moreover, perturbations caused by atomic or molecular partners lead to effective nonadiabatic transitions. For these reasons the authors propose this molecule as a model system for spectroscopic studies of intra- and intermolecular perturbations in other diatomic molecules.

Sergei S. Lukashov is Associate Professor of physics at the Saint-Petersburg State University, Russia. He teaches molecular spectroscopy and laser spectroscopy. The focus of his current research interests lies in gas-phase photochemistry and molecular dynamics in small molecules and molecular complexes.

He teaches "theoretical mechanics", "theory of molecules" and "quantum chemistry".  His scientific interests related with high-precision calculations of molecules, parity non-conservation effects, ultracold molecules and Feshbach resonances. He is author of more than sixty refereed publications.

He teaches kinetics and mechanisms of gas-phase processes and radiometry. The focus of his current research interests lies in gas-phase photochemistry as well as spectroscopy and dynamics in small molecules and weakly-bound complexes. He has already published a book on photoprocesses in molecular gasses, in 1992 in Russian, and a Springer book on radiometry in modern scientific experiments, in 2011.

“This will be a useful resource for researchers interested in the iodine molecule, its collisions and its vander Waals complexes. … this book provides an excellent snapshot of the current knowledge of the spectroscopy and perturbations of the iodine molecule, and should be regarded as such.” (Stephen H. Ashworth, Contemporary Physics, December 11, 2020)