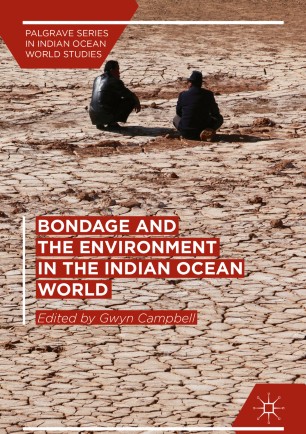 Bondage and the Environment in the Indian Ocean World

Monsoon rains, winds, and currents have shaped patterns of production and exchange in the Indian Ocean world (IOW) for centuries. Consequently, as this volume demonstrates, the environment has also played a central role in determining the region’s systems of bondage and human trafficking. Contributors trace intricate links between environmental forces, human suffering, and political conditions, examining how they have driven people into servile labour and shaped the IOW economy. They illuminate the complexities of IOW bondage with case studies, drawn chiefly from the mid-eighteenth century, on Sudan, Cape Colony, Réunion, China, and beyond, where chattel slavery (as seen in the Atlantic world) represented only one extreme of a wide spectrum of systems of unfree labour. The array of factors examined here, including climate change, environmental disaster, disease, and market forces, are central to IOW history—and to modern-day forms of human bondage.

“The long-term climate cycles of the rather expansive “Indian Ocean World” covered here, citing an impressive array of technical climate studies, attempts to distinguish debt-bondage from slavery … . World historians of many persuasions will accordingly find useful reminders of the climate component … in which they work and of the essential historicity of slaving.” (Joseph C. Miller, Journal of World History, Vol. 29 (4), December, 2018)