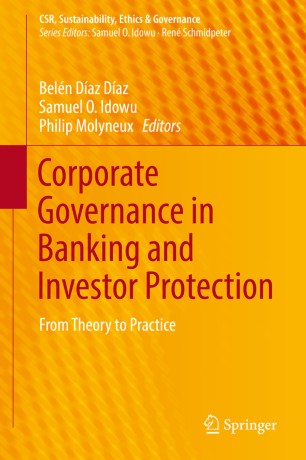 This book explores the status quo of corporate governance in banking and investor protection from both theoretical and practical perspectives. Bringing together original conclusions with a regional and international focus, it provides a timely and comprehensive overview of the effectiveness of corporate governance in the financial sector and an assessment of investor protection. It also includes a number of examples and case studies to illustrate the findings. The book compares corporate governance in the banking and financial industries before and after the financial crisis, and helps to evaluate the effect of the recommendations and regulations that have been developed in the interim.

Belén Díaz Díaz is Associate Professor of Financial Economics at the University of Cantabria and Academic Director of Santander Financial Institute (SANFI). Previously she has been  Vice-Dean of the Faculty of Business and Economics at the UC; ERASMUS Coordinator of the Faculty of Business and Economics in the UC and the Director of the Area of Campus and Social Development of the UC reporting to the Vice-Chancellor of Campus and Social Development responsible for the social responsibility policies at the UC. She has served as a visiting scholar/researcher at universities in the United States (University of Berkeley), Australia (University of Technology of Sydney), England (London School of Economics and Political Science and Staffordshire University), Argentina (Universidad Nacional de Jujuy) and Chile (Universidad Internacional SEK).Her research focuses on Corporate Finance, mergers and acquisitions, Corporate Governance and Corporate Social Responsibility. She has published scientific articles in relevant journals and books and has participated in several conferences showing the results of her research. The quality of her research was recognized with the "Sanchis Alcover Award”, awarded by the Scientific Association of Economy and Management in 2006. She is member of the editorial board of different publications. Her teaching focuses on stock markets, corporate finance and business valuation to undergraduates, postgraduates and PhD students.  She is Director and professor of the “International Master in Banking and Financial Markets” (organized jointly by UC and Santander Bank through SANFI), in Spain, Morocco, Mexico, Chile and Brazil. She is also professor of other postgraduate courses such as the “Official Master in Business Administration (MBA)” in the UC and the “Master in Accounting and Auditing” in the UC, among others. She has written several reports and developed more than 20 R+D projects about different financial and economic issues commissioned by different public and private entities.

Samuel O Idowu is a Senior Lecturer in Accounting and Corporate Social Responsibility at London Guildhall Faculty of Business & Law, London Metropolitan University, UK. He researches in the fields of Corporate Social Responsibility (CSR), Corporate Governance, Business Ethics and Accounting and has published in both professional and academic journals since 1989. He is a freeman of the City of London and a Liveryman of the Worshipful Company of Chartered Secretaries and Administrators. Samuel is the Deputy CEO and First Vice President of the Global Corporate Governance Institute. He has led several edited books in CSR, is the Editor-in-Chief of two Springer’s reference books – the Encyclopedia of Corporate Social Responsibility and the Dictionary of Corporate Social Responsibility, an Editor-in-Chief of the International Journal of Corporate Social Responsibility (IJCSR), the Editor-in-Chief of the American Journal of Economics and Business Administration (AJEBA) and an Associate Editor of the International Journal of Responsible Management in Emerging Economies (IJRMEE). He is also a Series Editor for Springer’s books on CSR, Sustainability, Ethics and Governance. One of his edited books won the most Outstanding Business Reference book Award of the American Library Association (ALA) in 2016 and another was ranked 18th in the 2010 Top 40 Sustainability Books by, Cambridge University, Sustainability Leadership Programme. Samuel is also an Editor of the International Journal of Responsible Management in Emerging Economies. He is a member of the Committee of the Corporate Governance Special Interest Group of the British Academy of Management (BAM). He is on the Editorial Boards of the International Journal of Business Administration, Canada and Amfiteatru Economic Journal, Romania. Samuel has delivered a number of Keynote Speeches at national and international conferences and workshops on CSR and has on two occasions 2008 and 2014 won Emerald’s Highly Commended Literati Network Awards for Excellence. To date, Samuel has edited several books in the field of CSR, Sustainability and Governance and has written six forewords to CSR books. Samuel has served as an external examiner to the following UK Universities – Sunderland, Ulster, Anglia Ruskin, Plymouth, Robert Gordon University, Aberdeen, Teesside University, Middlesbrough, Sheffield Hallam University and Leicester De Montfort University

Phil Molyneux is Dean of the College of Business Administration at the University of Sharjah (United Arab Emirates) and was previously Dean of the College of Law, Education and Social Sciences at Bangor University (UK). His main area of research is on the structure and efficiency of banking markets and he has published widely in this area with recent papers in the Journal of Financial Intermediation, Review of Finance, Journal of Banking and Finance, Journal of Money, Credit and Banking, the European Central Bank and Bank for International Settlements working paper series. His most recent texts include: An Introduction to Banking (with Barbara Casu and Claudia Girardone) Wiley 2015; Introduction to Global Financial Markets 8th edition (with Stephen Valdez) Palgrave Macmillan 2015 and The Oxford Handbook of Banking 2nd edition (edited with Allen N Berger and John Wilson) Oxford University Press 2014. In the past he has acted as a consultant to: New York Federal Reserve Bank, European Commission, UK Treasury; Citibank Private Bank, Barclays Wealth, McKinsey & co and various other international banks and consulting firms.