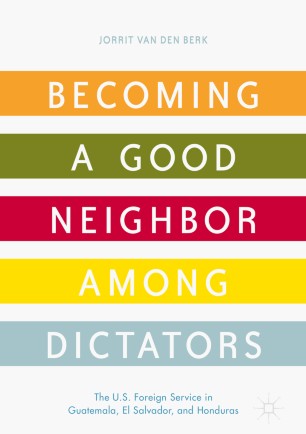 Becoming a Good Neighbor among Dictators

The U.S. Foreign Service in Guatemala, El Salvador, and Honduras

Very few works of history, if any, delve into the daily interactions of U.S. Foreign Service members in Latin America during the era of Roosevelt’s Good Neighbor Policy. But as Jorrit van den Berk argues, the encounters between these rank-and-file diplomats and local officials reveal the complexities, procedures, intrigues, and shifting alliances that characterized the precarious balance of U.S. foreign relations with right-wing dictatorial regimes. Using accounts from twenty-two ministers and ambassadors, Becoming a Good Neighbor among Dictators is a careful, sophisticated account of how the U.S. Foreign Service implemented ever-changing State Department directives from the 1930s through the Second World War and early Cold War, and in so doing, transformed the U.S.-Central American relationship.  How did Foreign Service officers translate broad policy guidelines into local realities? Could the U.S. fight dictatorships in Europe while simultaneously collaborating with dictators in Guatemala, El Salvador, and Honduras?  What role did diplomats play in the standoff between democratic and authoritarian forces? In investigating these questions, Van den Berk draws new conclusions about the political culture of the Foreign Service, its position between Washington policymakers and local actors, and the consequences of foreign intervention.