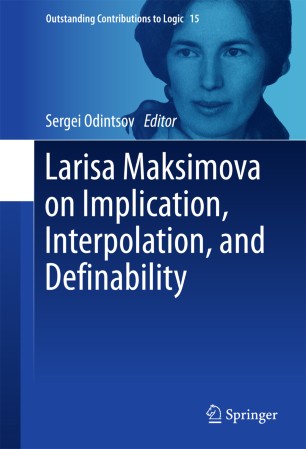 This edited volume focuses on the work of Professor Larisa Maksimova, providing a comprehensive account of her outstanding contributions to different branches of non-classical logic. The book covers themes ranging from rigorous implication, relevance and algebraic logic, to interpolation, definability and recognizability in superintuitionistic and modal logics. It features both her scientific autobiography and original contributions from experts in the field of non-classical logics.

Professor Larisa Maksimova's influential work involved combining methods of algebraic and relational semantics. Readers will be able to trace both influences on her work, and the ways in which her work has influenced other logicians. In the historical part of this book, it is possible to trace important milestones in Maksimova’s career. Early on, she developed an algebraic semantics for relevance logics and relational semantics for the logic of entailment. Later, Maksimova discovered that among the continuum of superintuitionisitc logics there are exactly three pretabular logics. She went on to obtain results on the decidability of tabularity and local tabularity problems for superintuitionistic logics and for extensions of S4.

Further investigations by Maksimova were aimed at the study of fundamental properties of logical systems (different versions of interpolation and definability, disjunction property, etc.) in big classes of logics, and on decidability and recognizability of such properties. To this end she determined a powerful combination of algebraic and semantic methods, which essentially determine the modern state of investigations in the area, as can be seen in the later chapters of this book authored by leading experts in non-classical logics. These original contributions bring the reader up to date on the very latest work in this field.

Sergei Odintsov is a leading researcher of Sobolev Institute of Mathematics (Novosibirsk, Russian Federation). He is known for his work in algorithm theory and non-classical logic, including paraconsistent logics, constructive logics, semantics of logic programs. Moreover, he is an associated editor of the journal Studia Logica (Springer), a  member of the editorial boards of the journal Logica Universalis (Birkhauser) and of the book series Trends in Logic (Springer).