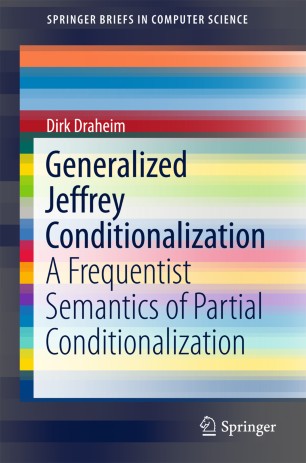 A Frequentist Semantics of Partial Conditionalization

This book provides a frequentist semantics for conditionalization on partially known events, which is given as a straightforward generalization of classical conditional probability via so-called probability testbeds. It analyzes the resulting partial conditionalization, called frequentist partial (F.P.) conditionalization, from different angles, i.e., with respect to partitions, segmentation, independence, and chaining. It turns out that F.P. conditionalization meets and generalizes Jeffrey conditionalization, i.e., from partitions to arbitrary collections of events, opening it for reassessment and a range of potential applications. A counterpart of Jeffrey’s rule for the case of independence holds in our frequentist semantics. This result is compared to Jeffrey’s commutative chaining of independent updates.
The postulate of Jeffrey's probability kinematics, which is rooted in the subjectivism of Frank P. Ramsey, is found to be a consequence in our frequentist semantics. This way the book creates a link between the Kolmogorov system of probability and one of the important Bayesian frameworks. Furthermore, it shows a preservation result for conditional probabilities under the full update range and compares F.P. semantics with an operational semantics of classical conditional probability in terms of so-called conditional events. Lastly, it looks at the subjectivist notion of desirabilities and proposes a more fine-grained analysis of desirabilities a posteriori.
This book appeals to researchers who are involved in any kind of knowledge processing systems. F.P. conditionalization is a straightforward, fundamental concept that fits human intuition, and is systematically linked to one of the important Bayesian frameworks. As such, the book is interesting for anybody investigating the semantics of reasoning systems.

Dirk Draheim is full professor of information society technologies and head of the large-scale systems group at Tallinn University of Technology. From to 1990 to 2006 he worked as an IT project manager, IT consultant and IT author in Berlin. In summer 2006, he was Lecturer at the University of Auckland and from 2006-2008 he was area manager for database systems at the Software Competence Center Hagenberg as well as Adjunct Lecturer in information systems at the Johannes-Kepler-University Linz. From 2008 to 2016 he was head of the data center of the University of Innsbruck and, in parallel, from 2010 to 2016, Adjunct Reader at the Faculty of Information Systems of the University of Mannheim. Dirk is co-author of the Springer book "Form-Oriented Analysis" and author of the Springer books "Business Process Technology" and "Semantics of the Probabilistic Typed Lambda Calculus".