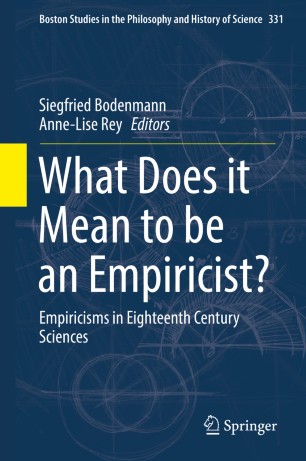 What Does it Mean to be an Empiricist?

Part of the Boston Studies in the Philosophy and History of Science book series (BSPS, volume 331)

This book begins with an observation: At the time when empiricism arose and slowly established itself, the word itself had not yet been coined. Hence the central question of this volume: What does it mean to conduct empirical science in early modern Europe? How can we catch the elusive figure of the empiricist?

Our answer focuses on the practices established by representative scholars. This approach allows us to demonstrate two things. First, that empiricism is not a monolith but exists in a plurality of forms. Today’s understanding of the empirical sciences was gradually shaped by the exchanges among scholars combining different traditions, world views and experimental settings. Second, the long proclaimed antagonism between empiricism and rationalism is not the whole story. Our case studies show that a very fruitful exchange between both systems of thought occurred. It is a story of integration, appropriation and transformation more than one of mere opposition.

We asked twelve authors to explore these fascinating new facets of empiricisms. The plurality of their voices mirrors the multiple faces of the concept itself. Every contribution can be understood as a piece of a much larger puzzle. Together, they help us better understand the emergence of empiricism and the inventiveness of the scientific enterprise.

Buffon’s Histoire naturelle Construction and Diffusion of a Pluralistic Concept Empiricism and Certainty in Science Empiricism as Rhetoric of Legitimation Empiricist in Medicine Enlightenment Issue of Empiricism Experiments of Willelm ’sGravesande Experimentum crucis Fictious Empiricism Lambert’s Theory of Empirical Science Leibnizian Dynamics Against Newton Rationalism, Empiricism, and the Unobservable The Brain and the Stirrings of Ontology What Does It Mean to Be an 18th Century Empiricist?

Siegfried Bodenmann teaches early modern history at the University of Zurich. He was trained as an historian and philosopher, with emphasis on the history of science and knowledge. He is currently researching the forms and rhetorical styles of scholarly communication in the eighteenth century. He has published several articles on the subject in the Revue d’Histoire des Sciences and in Dix-Huitième Siècle, but also, for a broader audience, in Physics Today. Other publications investigate the emergence of a scientific identity like his miscellany on myths, heroes, and symbols in the history of science. He is one of the scientific editors of the correspondence of the eighteenth-century mathematician Leonhard Euler. He has been an advisory board member of the Swiss Society for the History of Medicine and Sciences and the 2006 prize winner of the Deutsche Gesellschaft für Geschichte der Medizin, Naturwissenschaften und Technik (DGGMNT) among other memberships and distinctions.

Anne-Lise Rey, agrégée in Philosophy, is associate professor of history and philosophy of science at the University of Lille I. In 2003, she defended her thesis on Leibniz’s dynamics at the Sorbonne, Paris, under the direction of Michel Fichant. She defended her habilitation thesis on the epistemological practices and natural philosophy un the eighteenth century, supervised by P.-F. Moreau, at the Lyon ENS in 2013. She has published numerous articles on the relations between science and philosophy in Leibniz and on eighteenth century natural philosophy. She has also edited a collective work entitled Méthode et Histoire, dealing with methods in history and philosophy of science. She was a member of the School of Historical Studies at the Institute for Advanced Study (Princeton) in 2012-2013. In 2016, she published a French translation of the correspondence between Leibniz and De Volder, including an extended introduction on the notion of action in Leibniz’s dynamical thought.