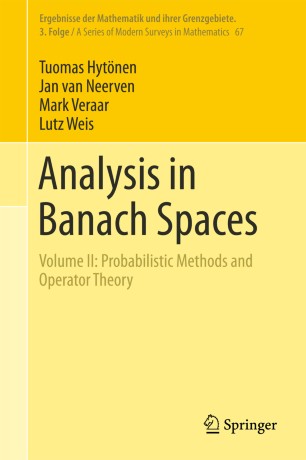 This second volume of Analysis in Banach Spaces, Probabilistic Methods and Operator Theory, is the successor to Volume I, Martingales and Littlewood-Paley Theory. It presents a thorough study of the fundamental randomisation techniques and the operator-theoretic aspects of the theory. The first two chapters address the relevant classical background from the theory of Banach spaces, including notions like type, cotype, K-convexity and contraction principles. In turn, the next two chapters provide a detailed treatment of the theory of R-boundedness and Banach space valued square functions developed over the last 20 years. In the last chapter, this content is applied to develop the holomorphic functional calculus of sectorial and bi-sectorial operators in Banach spaces. Given its breadth of coverage, this book will be an invaluable reference to graduate students and researchers interested in functional analysis, harmonic analysis, spectral theory, stochastic analysis, and the operator-theoretic approach to deterministic and stochastic evolution equations.

Jan van Neerven is Professor of Analysis at Delft University of Technology. Author of more than 100 research papers and two monographs, he is a leading expert in Operator Theory and Stochastic Analysis. He held post-doctoral positions at Caltech and Tübingen University. He was awarded a Human Capital and Mobility fellowship, a fellowship of the Royal Dutch Academy of Arts and Sciences, and VIDI and VICI subsidies from the Netherlands Organisation for Scientific Research.

Mark Veraar is Associate Professor at Delft University of Technology. Author of over 40 research papers, he is a leading researcher in the theory of evolution equations and stochastic partial differential equations. He held post-doctoral positions at the Universities of Warsaw and Karlsruhe, the latter with a Alexander von Humboldt Fellowship. He is the recipient of VENI and VIDI grants from the Netherlands Organisation for Scientific Research.

Lutz Weis, a Professor at Karlsruhe Institute of Technology, is a senior researcher in operator theory and evolution equations. He has published over 80 research papers and a monograph. Since receiving his PhD from University of Bonn, he was a professor at Louisiana State University and visiting professor at TU Berlin as well as Universities of Kiel, South Carolina and Minnesota. He organized a Marie Curie training site and is currently a member of a DFG Graduiertenkolleg.

“The book will become an invaluable reference for graduate students and researchers. Those interested in functional analysis, harmonic analysis and stochastic analysis will appreciate the detailed treatment of the theory of R-boundedness, radonifying operators and holomorphic functional calculus developed over the last 20 years.” (Oscar Blasco, zbMATH 1402.46002, 2019)
Buy options