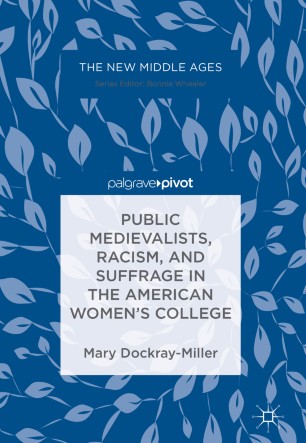 Public Medievalists, Racism, and Suffrage in the American Women’s College

This study, part of growing interest in the study of nineteenth-century medievalism and Anglo-Saxonism, closely examines the intersections of race, class, and gender in the teaching of Anglo-Saxon in the American women’s colleges before World War I, interrogating the ways that the positioning of Anglo-Saxon as the historical core of the collegiate English curriculum also silently perpetuated mythologies about Manifest Destiny, male superiority, and the primacy of northern European ancestry in United States culture at large. Analysis of college curricula and biographies of female professors demonstrates the ways that women used Anglo-Saxon as a means to professional opportunity and political expression, especially in the suffrage movement, even as that legitimacy and respectability was freighted with largely unarticulated assumptions of racist and sexist privilege.  The study concludes by connecting this historical analysis with current charged discussions about the intersections of race, class, and gender on college campuses and throughout US culture.

Mary Dockray-Miller is Professor of English at Lesley University, where she teaches undergraduate classes in literary history, the history of the English language, and medieval studies. She is the author of The Books and the Life of Judith of Flanders (2015) and the editor of the Wilton Chronicle (2009).