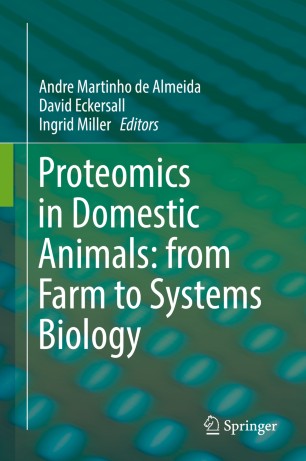 Proteomics in Domestic Animals: from Farm to Systems Biology

Proteomics, like other post-genomics tools, has been growing at a rapid pace and has important applications in numerous fields of science. While its use in animal and veterinary sciences is still limited, there have been considerable advances in this field in recent years, in areas as diverse as physiology, nutrition and food of animal origin processing. This is mainly as a consequence of a wider availability and better understanding of proteomics methodologies by animal and veterinary researchers. This book provides a comprehensive, state-of-the-art account of the status of farm-animal proteomics research, focusing on the principles behind proteomics methodologies and its specific applications and offering clear example.

André M. de Almeida obtained a Degree in Animal Science by the University of Évora (1998), an MSc in Tropical Veterinary Medicine by the Faculty of Veterinary Medicine (Lisbon, 2000) and a PhD in Biology by the Instituto de Tecnologia Química e Biológica (ITQB, 2005). AM Almeida was a Researcher at the Instituto de Investigação Científica Tropical (Lisboa, Portugal) from 2000-15 and was Professor of Animal Production at Ross University School of Veterinary Medicine in St. Kitts (West Indies) from 2015-2016. He is currently Professor in the fields of Animal Nutrition, Feeding and Ruminant Production at the Agronomy Institute of the University of Lisbon (Portugal). AM Almeida has worked in South Africa, Spain and Australia.

His research interests are vast but are mainly dedicated to studies in the Physiology, Disease and Production of Farm Animals, using Proteomics and Mass Spectrometry. AM Almeida participate(d) in seven national Research projects (six Portuguese and one Australian) and was awarded with a visiting Scientist Research grant from the government of the State of Western Australia (Perth, WA, Australia). Further, he was Vice-Chair of COST action FA1002 - Proteomics in Farm Animals, financed by the European Science Foundation. AM Almeida has published 13 international book chapters (including one edited by the Food and Agricultural Organization of the United Nations) and over 60 papers in international peer- reviewed journals. AM Almeida is presently an associated editor of Tropical Animal Health and Production (Springer) and was an invited editor of the Journal of Proteomics (Elsevier). He is a regular reviewer for major Proteomics and Animal Science journals. AM Almeida was invited to lecture several oral presentations in Portugal, Spain, Sweden, Norway, Turkey, Austria, The United States, Australia and New Zealand, among others.

Professor Peter David Eckersall graduated from the University of Liverpool with a BSc in Biochemistry (1973) and a PhD in Biochemistry from University of Edinburgh (1977). He is a Fellow of the Royal College of Pathologists, a Fellow of the Royal Society of Biology and a Member of the Academia Europaea. Prof Eckersall has been Lecturer, Senior Lecturer and Professor of Veterinary Biochemistry at the School of Veterinary Medicine, University of Glasgow. He is now the ERA Chair in the Proteomics Laboratory of the Faculty of Veterinary Medicine, University of Zagreb. His research focused on the diagnostic applications of protein analysis in Veterinary Medicine and he has published over 200 peer reviewed papers. He holds three patents and his research has been cited over 7900 times with an H-factor of 47. He has been on the Editorial Board of Proteomics, Biomarkers and BMC Veterinary Research and has co-edited the first text on Animal Proteomics (Methods in Animal Proteomics). He held research grants worth over £6 million and supervised 23 Doctoral and Master Students. Prof Eckersall was the Chair of the COST Action for Farm Animal Proteomics (2011-14). He was awarded with the Heiner Sommer Prize of the International Society for Animal Clinical Pathology for his Lifetime Contribution to Animal Clinical Biochemistry in 2008 and with the Siemens Prize of the American Association of Clinical Chemistry for his Contributions to Animal Clinical Chemistry in 2010.

Ingrid Miller holds a PhD in environmental sciences from Wageningen University, The Netherlands, and works at the Institute for Medical Biochemistry, Department for Biomedical Sciences, at the University of Veterinary Medicine Vienna, Austria. Though originally trained in Technical Chemistry, she specialized early in Protein Chemistry and Protein Analytics, mainly on proteins of animal origin and from biological sources. Since more than two decades, her major focus lies on Proteomics and Two-dimensional Electrophoresis, with a special interest in Methodology. She is a member of the Editorial Boards of several proteomic and analytical journals and a regular reviewer. She has been the Austrian Representative in the EuPA General Council for several years, and was one of the Founding Members of the Austrian Proteomics Society. Since September 2009, she is Executive Editor for Animal Proteomics in the Journal of Proteomics, where she also acted as Guest Editor for thematic issues on Farm Animal Proteomics, Proteomics in Ecotoxicology and Gender-related Proteomics. She is (Co-) Author of more than 100 peer-reviewed papers and contributed chapters to several books in the field.