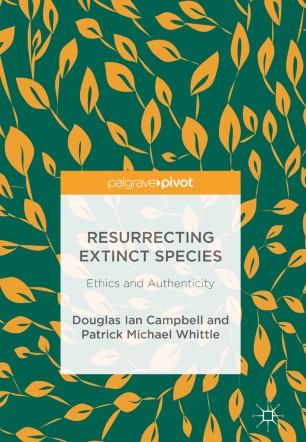 This book is about the philosophy of de-extinction. To make an extinct species ‘de-extinct’ is to resurrect it by creating new organisms of the same, or similar, appearance and genetics. The book describes current attempts to resurrect three species, the aurochs, woolly mammoth and passenger pigeon. It then investigates two major philosophical questions such projects throw up. These are the Authenticity Question—‘will the products of de-extinction be authentic members of the original species?’—and the Ethical Question—‘is de-extinction something that should be done?' The book surveys and critically evaluates a raft of arguments for and against the authenticity or de-extinct organisms, and for and against the ethical legitimacy of de-extinction. It concludes, first, that authentic de-extinctions are actually possible, and second, that de-extinction can potentially be ethically legitimate, especially when deployed as part of a ‘freeze now and resurrect later’ conservation strategy.

Douglas Campbell is Philosophy Lecturer at the University of Canterbury, New Zealand, and completed his PhD at the University of Arizona, USA. With a background in biology, he has worked as a wildlife warden and conservationist. His research interests include philosophy of mind, philosophical logic, epistemology and metaphysics. His work on de-extinction has included public lectures, conference presentations, and academic journal articles.

Patrick Michael Whittle, who holds a PhD in Philosophy from the University of Canterbury, New Zealand, is a freelance writer and journalist based in Christchurch, New Zealand. As well as writing about science, politics and environmental issues (including de-extinction) at both a popular and academic level, he has worked in universities and educational establishments in New Zealand, Europe, the Middle East and Central Asia.