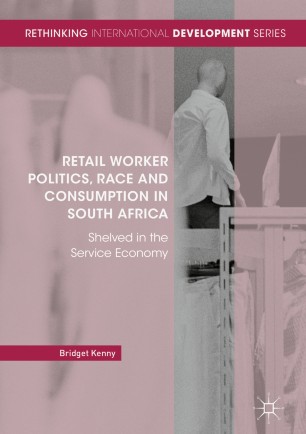 Shelved in the Service Economy

This book argues that we need to focus attention on the ways that workers themselves have invested subjectively in what it means to be a worker. By doing so, we gain an explanation that moves us beyond the economic decisions made by actors, the institutional constraints faced by trade unions, or the power of the state to interpellate subjects. These more common explanations make workers and their politics visible only as a symptom of external conditions, a response to deregulated markets or a product of state recognition. Instead – through a history of retailing as a site of nation and belonging, changing legal regimes, and articulations of race, class and gender in the constitution of political subjects from the 1930s to present-day Wal-Mart – this book presents the experiences and subjectivities of workers themselves to show that the collective political subject ‘workers’ (abasebenzi) is both a durable and malleable political category. From white to black women’s labour, the forms of precariousness have changed within retailing in South Africa. Workers’ struggles in different times have in turn resolved some dilemmas and by other turn generated new categories and conditions of precariousness, all the while explaining enduring attachments to labour politics.

Bridget Kenny is Associate Professor of Sociology at the University of the Witwatersrand, South Africa. She works on labour, gender and consumption with a specific focus on service work, precarious employment, and political subjectivity.

“Retail Worker Politics, Race and Consumption in South Africa offers searing insight into the contested world of retail work and labour politics over the past century in South Africa. … Given the book’s ambitious historical scope and research agenda, its contributions are manifold. … As we confront the sobering realities of our present, Kenny’s book leaves us with a key question about the stakes and the political horizons of labour politics forged during previous eras of struggle.” (Jennifer Jihye Chun, Global Labour Journal, Vol. 9 (03), September, 2018)
Buy options