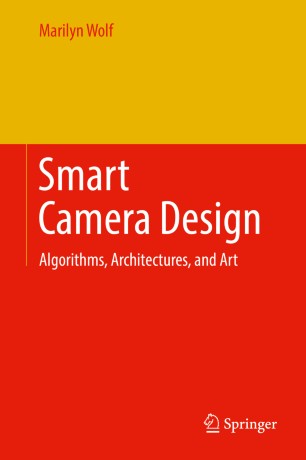 This book describes the algorithms and computer architectures used to create and analyze photographs in modern digital cameras. It also puts the capabilities of digital cameras into context for applications in art, entertainment, and video analysis.   The author discusses the entire range of topics relevant to digital camera design, including image processing, computer vision, image sensors, system-on-chip, and optics, while clearly describing the interactions between design decisions at these different levels of abstraction.  Readers will benefit from this comprehensive view of digital camera design, describing the range of algorithms used to compose, enhance, and analyze images, as well as the characteristics of optics, image sensors, and computing platforms that determine the physical limits of image capture and computing.  The content is designed to be used by algorithm designers and does not require an extensive background in optics or electronics.

Marilyn Wolf received her bachelor's, master's, and doctoral degrees in electrical engineering from Stanford University in 1980, 1981, and 1984, respectively. She was with AT&T Bell Laboratories in Murray Hill, N.J. from 1984 to 1989 and was with Princeton University from 1989 until 2007. In July 2007, Dr. Wolf joined Georgia Tech as the Rhesa "Ray" S. Farmer, Jr. Distinguished Chair in Embedded Computing Systems and Georgia Research Alliance Eminent Scholar. She has developed a number of techniques for embedded computing, ranging from hardware/software co-design algorithms and real-time scheduling algorithms to code compression and distributed smart cameras. She is a co-founder of Verificon Corporation, which designs smart camera systems. She helped to start several technical conferences, including CODES and MPSoC. She has written four textbooks.