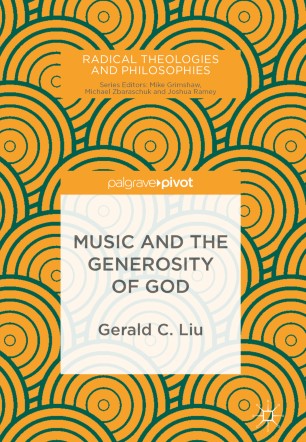 Music and the Generosity of God

Part of the Radical Theologies and Philosophies book series (RADT)

What if sounds everywhere lavish divine generosity? Merging insights from Jean-Luc Marion with musical ingenuity from Pierre Boulez and John Cage’s 4’33”, Gerald C. Liu blends the phenomenological, theological, and musical to formulate a hypothesis that in all places, soundscapes instantiate divine giving without boundary. He aims to widen apprehension of holiness in the world, and privileges the ubiquity of sound as a limitless and easily accessible portal for discovering the inexhaustible magnitude of divine giving.

“Gerald Liu’s book is an achievement of interdisciplinarity. Creatively synthesizing approaches drawn from a variety of far-flung fields, the work advances a radically open and pluralistic vision for the theological significance of all manner of sonic expression, from the esoteric to the everyday. At the heart of the book’s analysis are provocative re-assessments of several monuments of postwar modernist composition. Alongside Liu’s intricate defense of the value of 'the din of the sacred,' readers will find engaging excursions into twentieth-century cultural and intellectual history. This stimulating volume deserves a wide audience, one just as diverse and multidisciplinary as are the forms of insight that lend it such a distinctive voice.” (Benjamin Looker, author of A Nation of Neighborhoods: Imagining Cities, Communities, and Democracy in Postwar America)

“For any who have spent energy considering the relationship between music and theology, this succinct and unsettling contribution by Dr. Liu is a must read.  An unabashed romp through late colonial theories, Cagian contributions, and theological interlocutors, this small book is nonetheless expansive in its vision. His work poses many questions.  While not agreeing with every idea, I cannot dismiss his helpfulness in expanding the field. If  you are interested in examining the role of music in a post-modern theological mode, then this is your guide.” (Edward Foley, Catholic theological Union, USA)