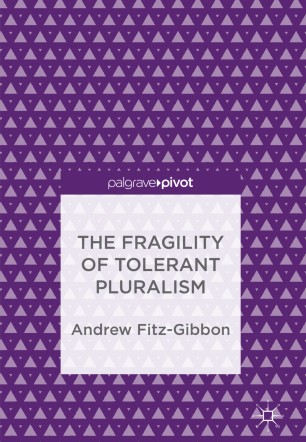 The Fragility of Tolerant Pluralism

Sparked by the recent threats to an open and pluralistic society in both Europe and the United States, The Fragility of Tolerant Pluralism is an exploration of social and political philosophy. Using the early sixteenth century as a lens to view our own struggles with multiple visions of a good society, the book looks at tolerant pluralism in the light of the twin challenges of resurgent nationalisms and Islamist terrorism. The book makes a case not only for social toleration, but for a deep pluralism that both values and celebrates difference. It also suggests that the radical sects in Europe in the early sixteenth-century challenged the political and religious monisms of both Catholic and Protestant territories, hence planting the seeds of tolerant pluralism. The struggles faced in the sixteenth-century both reflect and inform our own pressing concerns today and as such, The Fragility of Tolerant Pluralism draws six lessons for our current situation.

Andrew Fitz-Gibbon is Professor of Philosophy, Chair of the Philosophy Department, and Director of the Center for Ethics, Peace and Social Justice, at the State University of New York College at Cortland, USA. He is the author, co-author, or editor of thirteen books, numerous book chapters and articles in peer reviewed journals.

“Fitz-Gibbon's essay seeks timely cultivation for seeds of cultural pluralism. This study recollects scattered remnants of the Radical Reformation in a new and refreshing way in order to reconstruct critical concepts that can guide social ethics into a pluralistic, democratic future.” (Greg Moses, Editor of The Acorn: Philosophical Studies in Pacifism and Nonviolence, and Philosophy Lecturer at Texas State University, USA)

“Fitz-Gibbon's fascinating meditation on the history and historiography of the Anabaptists builds to a compelling argument about the roots of tolerance in the spiritual belief of the sixteenth century rather than in the reason of the Enlightenment. Liberal arguments for tolerance built upon the Enlightenment rarely take religion seriously, or they require that citizens of diverse backgrounds set their beliefs aside to work together. This essay instead reimagines tolerance for our times. After all, religious belief continues (and even has increased) in its importance today to many anxious individuals and groups struggling to live on a fragile planet.” (Scott Moranda, Associate Professor of History, SUNY Cortland)