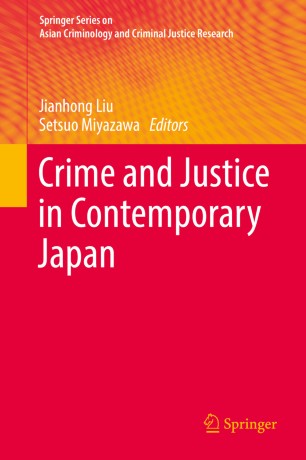 Crime and Justice in Contemporary Japan

This book provides an important overview of key criminology and criminal justice concerns in Japan. It highlights similarities between the practice of criminology research in Japan, as well as important differences, with other areas of Asia and with the West.

In previous decades, Japan attracted international attention as the only industrialized country where the crime rate declined along with a rise in urbanization and economic development. Currently, Japan still enjoys a declining crime rate (the lowest among major industrialized countries) and a study of criminal justice practices in Japan may provide important insights for other regions.

Japan also experiences important contemporary challenges which are shared by other regions:

1. Japan has the highest proportion of people over the age of 60 in the world. For criminology, this means key challenges in the victimization of older people, as well as the challenges of an aging prison population.

2. Besides the United States, Japan is the only developed country that still practices capital punishment, and its rate has been on the rise in the past 20 years.

3. Japan has also introduced new reforms in its law practice, including the introduction of new trial formats.

The research in this book provides a helpful overview for scholars interested in criminology and criminal justice in Japan to understand the key issues of concern, and present a framework for future research needs. It will be of interest to researchers in criminology and criminal justice, international studies, Asian Studies, sociology, and political science.

Jianhong Liu is Professor of Criminology at University of Macau, China. He is currently the elected Chairman of the General Assembly of the Asian Criminological Society (2016-) and the elected President of the Scientific Commission of the International Society for Criminology (since 2014).  He has served on leadership roles in many international academic organizations and has been appointed by numerous prominent universities and research institutes as honorary professors or research fellows. Professor Liu was the Founding President of Asian Criminological Society (from 2009 to 2015). He is the editor-in-chief of the Asian Journal of Criminology (Springer Publishing), the editor of “Springer Series on Asian Criminology and Criminal Justice”, and a member of the editorial boards of more than 20 international academic journals, such as British Journal of Criminology. Professor Liu received his PhD from State University of New York at Albany in 1993.  His primary research interests are international and comparative criminology, Asian Criminology, and Chinese crime and Justice.  He is the author, editor, or co-editor of 29 books, and has published more than 100 articles and book chapters. He is the author of Asian Paradigm and Relationism Theory of Comparative Criminal Justice. In 2016, Professor Liu was selected to receive Freda Adler Distinguished Scholar Award from the American Society of Criminology (ASC), for his outstanding contributions to comparative criminology

Setsuo Miyazawa is a legal sociologist who received LL.B., LL.M., and S.J.D. from Hokkaido University and M.A., M.Phil., and Ph.D. in sociology from Yale. He has been a full-time faculty member at Hokkaido University, Kobe University, Waseda University, Omiya Law School, and Aoyama Gakuin University in Japan before reaching mandatory retirement at Aoyama Gakuin in 2016. He still teaches in Japan as an adjunct lecturer at Waseda and Aoyama Gakuin in the spring. He has also taught as a visiting professor at the law schools of York University (Canada), the University of Washington, Harvard (Mitsubishi Visiting Professor of Japanese Legal Studies), UC Berkeley (Sho Sato Visiting Professor), UCLA, NYU (Global Law Faculty), the University of Hawaii, the University of Pennsylvania, and Fordham. His first visit to Hastings was in 2008, and he joined full time faculty at Hastings in the fall 2013. He teaches at Hastings in the fall and serves as the Senior Director of the East Asian Legal Studies Program which was established in 2015. He has also organized an annual symposium on Japanese law at Hastings since 2012.