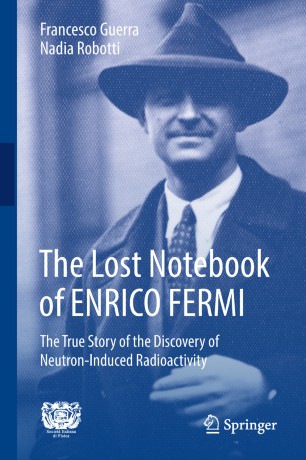 The Lost Notebook of ENRICO FERMI

The True Story of the Discovery of Neutron-Induced Radioactivity

This book tells the curious story of an unexpected finding that sheds light on a crucial moment in the development of physics: the discovery of artificial radioactivity induced by neutrons. The finding in question is a notebook, clearly written in Fermi's handwriting, which records the frenzied days and nights that Fermi spent experimenting alone, driven by his theoretical ideas on beta decay. The notebook was found by the authors while browsing through documents left by Oscar D'Agostino, the chemist among Fermi's group. From Fermi's notes, they reconstruct with skill and expertise the detailed timeline of the critical days leading up to his vital discovery. While much is already known about the road that led Fermi to his important result, this is the first time that it has been possible to reconstruct precisely when and how the initial evidence of neutron-induced decay was obtained. In relating this fascinating story, the book will be of great interest not only to those with a passion for the history of science but also to a wider audience.