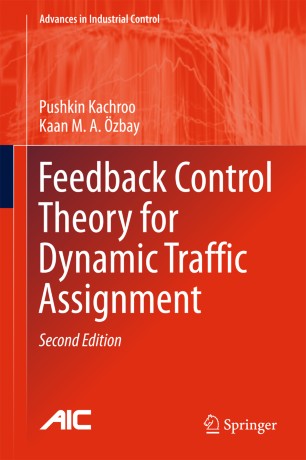 This book develops a methodology for designing feedback control laws for dynamic traffic assignment (DTA) exploiting the introduction of new sensing and information-dissemination technologies to facilitate the introduction of real-time traffic management in intelligent transportation systems. Three methods of modeling the traffic system are discussed:Feedback control formulations for reaching road-user-equilibrium are presented for each setting and advantages and disadvantage of using each are addressed. The closed-loop methods described are proposed expressly to avoid the counter-productive shifting of bottlenecks from one route to another because of driver over-reaction to routing information.
The second edition of Feedback Control Theory for Dynamic Traffic Assignment has been thoroughly updated with completely new chapters:

Techinques accounting for the importance of entropy are further new inclusions at various points in the text.

Researchers working in traffic control will find the theoretical material presented a sound basis for further research; the continual reference to applications will help professionals working in highway administration and engineering with the increasingly important task of maintaining and smoothing traffic flow; the extensive use of end-of-chapter exercises will help the graduate student and those new to the field to extend their knowledge.

Pushkin Kachroo is the Lincy Professor of Transportation in the department of Electrical and Computer Engineering at the University of Nevada Las Vegas (UNLV).  He was a Visiting Professor at the University of California at Berkeley working with Professor Shankar Sastry. He is the director of the Mendenhall Innovation Program at the Thomas a Hughes College of Engineering at UNLV. He was an Associate Professor at Virginia Tech before he joined UNLV in 2007. He obtained his Ph.D. in Mechanical Engineering from University of California at Berkeley performing research in Vehicle Control in 1993 under Professor Masayoshi Tomizuka, and obtained another Ph.D. in Mathematics from Virginia Tech in Mathematics in the area of hyperbolic system of partial differential equations with applications to Traffic Control and Evacuation under Professor Joseph A. Ball. He has authored 10 books on traffic and vehicle control. He has authored more than 120 publications that include books, research papers, and edited volumes. He has taught about 30 different courses in Virginia Tech in the areas of electrical and computer engineering, and mathematics. Similarly, he also taught 30 different courses at UNLV since 2007. He has graduated more than 35 graduate students, and has been P.I. or Co P.I. on projects worth more than 4 Million Dollars. He was awarded the most outstanding new professor at Virginia Tech, and also has received many teaching awards and certificates, both at Virginia Tech and UNLV. He also received the faculty excellence award from CSUN UNLV in 2011. He is pursuing an M.S. in Physics at UNLV with thesis work in Quantum Logic.
Kaan M.A. Özbay has joined Department of Civil and Urban engineering  and Center for Urban Science and Progress (CUSP) at NYU on August 2013.  Professor Ozbay was a tenured full Professor at the Rutgers University Department of Civil and Environmental Engineering until July 2013.  He joined Rutgers University as an Assistant Professor in July, 1996.  In 2008, he was a visiting scholar at the Operations Research and Financial Engineering (ORFE) Department of Princeton University. Dr. Ozbay's research interests in transportation cover a wide range of topics including the development of simulation models of large scale complex transportation systems, advanced technology and sensing applications for Intelligent Transportation Systems, modeling and evaluation of traffic incident and emergency management systems, feedback based on-line real-time traffic control techniques, traffic safety, application of operations research techniques in network optimization and humanitarian inventory control, and transportation economics.
Dr. Ozbay is the recipient of the prestigious National Science Foundation (NSF) CAREER award. Dr. Ozbay is the co-editor of a new book titled “Dynamic Traffic Control & Guidance” published by Springer Verlag’s "Complex Social, Economic and Engineered Networks" series in 2013. In addition to this book, Dr. Ozbay is the co-author of three other books titled “Feedback Based Ramp Metering for Intelligent Transportation Systems” published by Kluwer Academics in 2004,  "Feedback Control Theory for Dynamic Traffic Assignment", Springer-Verlag and “Incident Management for Intelligent Transportation Systems” published by Artech House publishers both in 1999. Dr. Ozbay published approximately 300 refereed papers in scholarly journals and conference proceedings. Professor Ozbay serves as the “Associate Editor” of Networks and Spatial Economic journal and Transportmetrica B: Transportation Dynamics journal. He is a member of the editorial board of the ITS journal.
Since 1994, Dr. Ozbay, has been the Principal Investigator and Co-Principal Investigator of 80 projects funded at a level of more than $11,00,000 by National Science Foundation, NJDOT, NYMTC, NY State DOT, New Jersey Highway Authority, USDOT, FHWA, VDOT, CUNY University Transportation Research Center (UTRC), Department of Homeland Security, USDOT ITS Research Center of Excellence. He was the founding director of the Rutgers Intelligent Transportation Systems (RITS) laboratory that led ITS research and education activities at Rutgers University until 2013.