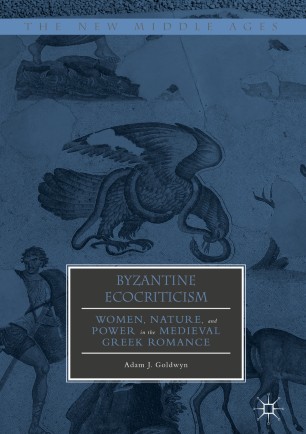 Women, Nature, and Power in the Medieval Greek Romance

Byzantine Ecocriticism: Women, Nature, and Power in the Medieval Greek Romance applies literary ecocriticism to the imaginative fiction of the Greek world from the twelfth to fifteenth centuries. Through analyses of hunting, gardening, bride-stealing, and warfare, Byzantine Ecocriticism exposes the attitudes and behaviors that justified human control over women, nature, and animals; the means by which such control was exerted; and the anxieties surrounding its limits. Adam Goldwyn thus demonstrates the ways in which intersectional ecocriticism, feminism, and posthumanism can be applied to medieval texts, and illustrates how the legacies of medieval and Byzantine environmental practice and ideology continue to be relevant to contemporary ecological and environmental concerns.

Adam J. Goldwyn is Assistant Professor of Medieval Literature and English at North Dakota State University, USA. He is co-translator of The Allegories of the Iliad (2015), a paraphrase of the Homeric epic by the twelfth-century Byzantine grammarian John Tzetzes.

“This book is a pathbreaking study in the field of Byzantine literature. … the book is meant to be accessible also to a nonspecialist audience. … All in all, Goldwyn’s volume on Byzantine ecocriticism is a successful attempt to apply an innovative approach to medieval Greek romance and to show how meaningful modern ideologies and theoretical elaborations can be in interpreting premodern texts.” (Rachele Ricceri, Speculum, Vol. 94 (4), October, 2019)
Buy options