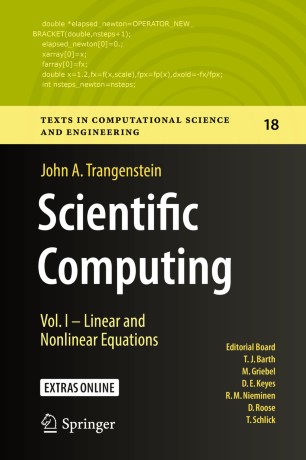 Vol. I - Linear and Nonlinear Equations

Part of the Texts in Computational Science and Engineering book series (TCSE, volume 18)

This is the first of three volumes providing a comprehensive presentation of the fundamentals of scientific computing. This volume discusses basic principles of computation, and fundamental numerical algorithms that will serve as basic tools for the subsequent two volumes. This book and its companions show how to determine the quality of computational results, and how to measure the relative efficiency of competing methods. Readers learn how to determine the maximum attainable accuracy of algorithms, and how to select the best method for computing problems. This book also discusses programming in several languages, including C++, Fortran and MATLAB. There are 80 examples, 324 exercises, 77 algorithms, 35 interactive JavaScript programs, 391 references to software programs and 4 case studies.

Topics are introduced with goals, literature references and links to public software. There are descriptions of the current algorithms in LAPACK, GSLIB and MATLAB.

This book could be used for an introductory course in numerical methods, for either upper level undergraduates or first year graduate students.

Parts of the text could be used for specialized courses, such as principles of computer languages or numerical linear algebra.

John Trangenstein is Professor of Mathematics Emeritus at Duke University in Durham North Carolina. He was a professor at Duke from 1991 to 2011. Previously he was a Mathematician in the Applied Mathematics Group at Lawrence Livermore National Laboratory from 1986 to 1991, a Research Specialist at Exxon Production Laboratory in Houston from 1981 to 1986, a Mathematician at S Cubed in San Diego from 1979 to 1981, and an Assistant Professor of Mathematics at the University of California at San Diego from 1975 to 1979. He received his PhD in Applied Mathematics from Cornell University in 1975, and his SB degree from the University of Chicago in 1972. He has authored two other book, with Cambridge University Press, namely Numerical Solution of Hyperbolic Partial Differential Equations (2009) and Numerical Solution of Elliptic and Parabolic Partial Differential Equations (2013).

“A comprehensive and largely self-contained treatment of the fundamental numerical mathematics necessary for addressing many of the mathematical problems that arise often in the physical sciences and engineering.” (Jason M. Graham, MAA Reviews, December, 2018)​
Buy options