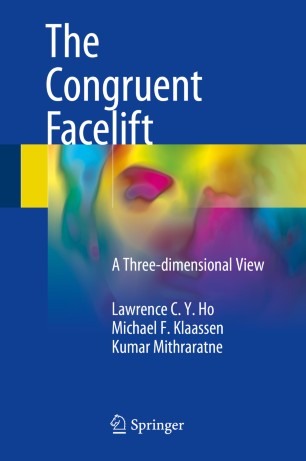 This book deals with a special form of facial rejuvenative surgery, which considers the three-dimensional anatomy of the face and benchmarks it against biomechanical models of the face. Traditional approaches to the ageing human face have been based on a two-dimensional approach. The authors, however, consider the human face using a three-dimensional platform that reflects height, width and depth and thus defines spatial divisions or pilasters. The anatomically accurate and bio-physically based three-dimensional computational models, originally used to simulate facial expressions and subsequently in the dynamic evaluation of the various soft tissues, offer a valuable new tool for surgical techniques.
The book is divided into four chapters, the first of which describes the historical developments, evolution of facelift procedures and review of traditional two-dimensional approach. The second chapter presents three-dimensional surgical anatomy of the face and neck with the introduction of "facial pilasters". Treating the human face as a collection of compliant and rigid structural components which obey engineering principles and its biomechanical behaviour is discussed in chapter three. The last chapter provides the reader comprehensive information on the surgical procedure for contour vector congruent facelift, including case studies. An alternative approach (Rejuvenative Facial Lipomorphoplasty) to the de-volumed ageing face with little sagging and skin excess is introduced together with case studies.
This book was motivated by the desire to define the key steps in facelift techniques and provides an essential guide for young plastic surgeons, as well as experienced surgeons who are dissatisfied with the current two-dimensional platform.

Lawrence C. Y. Ho graduated with an MBBS from the University of Sydney in 1965. He qualified FRCSE in 1971 and FRACS in 1974 and received his plastic surgical training at Stoke Mandeville Hospital in the UK and microsurgery training at Prince of Wales Hospital in Sydney. Dr. Ho was a leading cosmetic surgeon based in Macquarie Street, Sydney. Since 1993, he has worked with patients who were undergoing peels and laser skin resurfacing. The research and his personal passion for skin rejuvenation led Dr. Ho to create his unique brand, the Mayerling Skin Renewal System™.  He also developed and published the first Endoscopic Augmentation Mammaplasty. He has received numerous accolades and awards, and was nominated a "Leading Scientist of the World 2005" by the International Biographical Centre in Cambridge, England for his contributions in the area of Innovations in Plastic Aesthetic Surgery.
Michael F. Klaassen graduated from Otago University, New Zealand with
an MBChB in 1980. He qualified as a plastic surgeon in 1990 with FRACS, before working in the UK, Europe and Australia for three years. After a decade in the Waikato and half a decade in Sydney, he returned to Auckland in 2008 and opened Parnell Surgeon in April 2012. Dr. Klaassen`s special surgical interest has been in breast reduction surgery including male gynaecomastiy, eyelid rejuveantion, rhinoplasty for males and females, and body contouring procdures inclusing breast reconstruction following mastectomy. He has also developed spciela skills in the correction of prominent ears in children from neonates to teenagers. Facial rejuvenation with the use of fat stem cell volume enhancement is also a technique he has mastered over more than a decade.
Kumar Mithraratne graduated with a Bachelor of Science in Chemical Engineering from the University of Moratuwa, Sri Lanka. He subsequently received a Master of Science with Distinction from the University of London (King`s College London) and a PhD from the National University of Singapore, both in Mechanical Engineering. Dr. Mithraratne is a recipient of the British Government Technical Corporation Fellowship and a University of  Auckland Postdoctoral Fellowship. He is currently serving as a Principal Investigator/Senior Research Fellow at the Auckland Bioengineering Institute of the University of Auckland. His primary research interests include the computational biomechanics of the human musculoskeletal system, advanced computational methods, computional software development and heat transfer. Dr. Mithraratne has published over 75 scientific articles in refereed journals, conference proceedings and edited books.

“This is the authors' take on supporting various pillars of the face using permanent loop sutures along with the application of micro-fat grafts. … The authors' view of facial support systems will be helpful to facial surgeons interested in alternative face-lifting techniques. … will benefit those interested in the history, anatomy, and techniques discussed.” (Jeffrey S. Rosenthal, Doody's Book Reviews, May, 2018)
Buy options