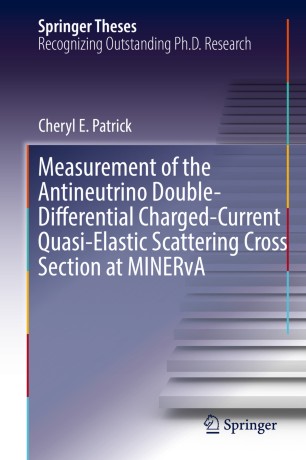 ​This thesis represents the first double differential measurement of quasi-elastic anti-neutrino scattering in the few GeV range--a region of substantial theoretical and experimental interest as it is the kinematic region where studies of charge-parity (CP) violation in the neutrino sector most require precise understanding of the differences between anti-neutrino and neutrino scatter. This dissertation also presents total antineutrino-scintillator quasi-elastic cross sections as a function of energy, which is then compared to measurements from previous experiments.
Next-generation neutrino oscillation experiments, such as DUNE and Hyper-Kamiokande, hope to measure CP violation in the lepton sector. In order to do this, they must dramatically reduce their current levels of uncertainty, particularly those due to neutrino-nucleus interaction models. As CP violation is a measure of the difference between the oscillation properties of neutrinos and antineutrinos, data about how the less-studied antineutrinos interact is especially valuable.
The measurement described herewith determines the nuclear and instrumental effects that must be understood to undertake precision neutrino physics. As well as being useful to help reduce oscillation experiments' uncertainty, this data can also be used to study the prevalence of various correlation and final-state interaction effects within the nucleus.
In addition to being a substantial scientific advance, this thesis also serves as an outstanding introduction to the field of experimental neutrino physics for future students.

Cheryl Patrick received her bachelor's degree in physics from the University of Oxford in 1997. She then worked as a software developer until 2010, when she commenced her doctoral studies at Northwestern University. She received her master's degree from Northwestern in 2012, and her Ph.D. in 2016, both in physics. She is now a postdoctoral researcher at UCL.