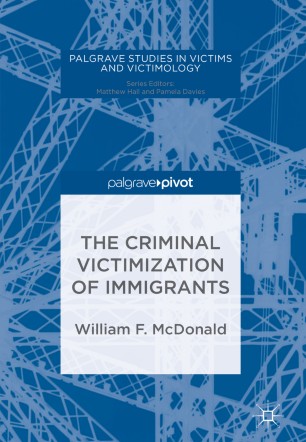 The Criminal Victimization of Immigrants

This book offers a comprehensive examination of the many forms of victimization of immigrants, including trafficking in persons for sexual exploitation and forced labor; assaulting, robbing and raping; refusing to pay wages; renting illegal living space that violates health codes; and domestic abuse both in general, and in particular, of mail-order brides.
McDonald examines a broad range of quantitative and qualitative data from historical and international sources including the USA, Canada, Mexico, Britain, Australia, France, Germany, Italy, Sweden, the Netherlands, Switzerland, Austria, Poland, and Spain. He writes with a view to correcting myths about the relationship between immigrants and crime, noting that immigrants are more likely to become victims than offenders.
The book outlines the multiple forms and contexts in which immigrants are victimized, exploited, and harmed. Reviewing micro- and macro-level victimological and sociological theories as they apply to patterns and forms of immigrants’ victimization, this study ultimately seeks to understand reasons for which immigrants are victimized by their own kind, and by persons outside their community.

William F. McDonald is Professor at the Department of Sociology in the College of Arts and Sciences at Georgetown University, USA; and Co- Director at the Institute of Criminal Law and Procedure at the Law Center, USA.