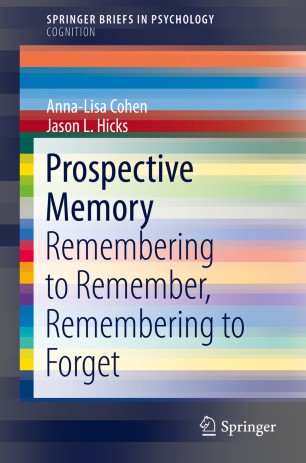 Prospective memory, or the act of remembering to carry out a previously formed intention, requires the processes of encoding, storage, and delayed retrieval of intended actions. Chapters in this Brief discuss the implementation and execution of intended actions, as well as the conditions in which they can fail. In addition, chapters also include reviews of the current state of the neuroscience of prospective memory as well as developments in statistical modeling. Laboratory research in the field of prospective memory began in the late 1980s and since then, the number of studies has increased exponentially. This Brief provides timely and relevant information in a field that is ever expanding and growing.

This Brief is an informative resource for researchers and undergraduate and graduate students in the field of psychology, cognitive psychology, and neuroscience.

Anna-Lisa Cohen is an Associate Professor of Psychology at Yeshiva University in New York, New York. Her research is guided by an interest in the influence that future goals and intentions have on behavior.  She earned her Ph.D. in Psychology from the University of Victoria, Canada.  Her research informs the development of theoretical orientations for understanding the cognitive processes that support prospective memory.  For example, her research on the intention interference effect shows that cues related to a delayed intention are difficult to ignore when encountered in an unexpected context and this is true for both young and older adults.  An enduring theme in much of her research is the flexibility with which participants are able to engage and disengage monitoring processes depending on the nature of task demands.
Jason L. Hicks is a Professor of Psychology at Louisiana State University in Baton Rouge, Louisiana. In 1998 he earned his Ph.D. in Cognitive/Experimental Psychology from the University of Georgia. His research interests include source memory, recognition memory, false memory, and prospective memory (PM). He has published over 30 articles or book chapters on PM. His work focuses on encoding, retrieval, and contextual factors that predict successful intention retrieval. Perhaps the most programmatic contribution in this area is a specification of the cognitive resources demanded by prospective memory retrieval. His early work highlighted the degrees to which prospective memory retrieval requires executive resources, but more recent work demonstrates that people can flexibly allocate attention depending on their appreciation of the demands governing anticipated retrieval contexts.

“This book containing a study on the state of art, meticulously prepared and presented in a very orderly, clear and concise on the subject.” (Melio Sáenz, ResearchGate, researchgate.net, July 12, 2019)
Buy options