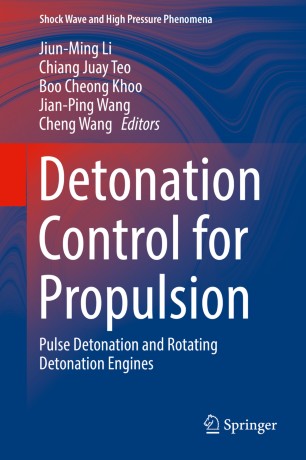 Detonation Control for Propulsion: Pulse Detonation and Rotating Detonation Engines provides, with its comprehensive coverage from fundamental detonation science to practical research engineering techniques, a wealth of information for scientists in the field of combustion and propulsion. The volume can also serve as a reference text for faculty and graduate students and interested in shock waves, combustion and propulsion.

Jiun-Ming LI is currently a Senior Research Scientist of the Temasek Laboratories, National University of Singapore and the leading researcher of the Hypersonics and Detonation Propulsion Group. Dr. Li studied for his B. Eng. degree at Naval Architecture and Marine Engineering at the National Cheng Kung University (NCKU) in Taiwan and received his M. Eng. and Ph.D. degrees in Institute of Aeronautics and Astronautics from NCKU. Before joining the Temasek Laboratories, he was Visiting Scholar at the Aerodynamics Research Center, the University of Texas at Arlington, U.S.A. His research interests are detonation physics and detonation propulsion applications, tunable diode laser absorption spectroscopy for fuel/combustion diagnostics, and studies on nanosecond pulse and AC DBD plasma actuators for flow control. He is a Member of AIAA.

Chiang Juay TEO received his B. Eng. and M. Eng. degrees in Mechanical Engineering from the National University of Singapore (NUS), and his Ph.D. in Aeronautics and Astronautics from the Massachusetts Institute of Technology (MIT). He is currently an Associate Professor at the NUS Department of Mechanical Engineering. He teaches core modules, technical electives and General Education Modules related to Fluid Mechanics. His research interests include thermal-fluids, microfluidics, hydrodynamics, aerodynamics and aerospace propulsion. He currently conducts research on the use of superhydrophobic surfaces for reducing flow resistance in microfluidic applications, the use of chaotic advection for heat transfer augmentation in microchannel heat sinks, Wing-In-Ground craft aerodynamics, flow cavitation, Detonation Engines and cross flow fans for Unmanned Air Vehicles.  Boo Cheong KHOO is presently the Director, Temasek Laboratories, National University of Singapore (NUS) and Professor, Department of Mechanical Engineering, Faculty of Engineering, NUS. He graduated from the University of Cambridge with a BA (Honours, 1st Class with Distinction) in 1980. He obtained his M. Eng. degree from the NUS in 1984, followed by his PhD from MIT in 1989. From 1998 to 1999, he was seconded to the Institute of High Performance Computing (IHPC, Singapore) and served as the deputy Director and Director of Research. In 1999, Dr. Khoo returned to NUS and spent time at the SMA-I (Singapore MIT Alliance I) as the co-Chair of High Performance Computation for Engineered Systems Program till 2004. During 2005-2013, under the SMA-II, he was appointed as the co-Chair of Computational Engineering Program. In 2011-2012, BC was appointed the Director of Research, Temasek Laboratories, NUS. Since 2012, he has been the Director, Temasek Laboratories. BC Khoo serves on numerous organizing and advisory committees for International Conferences/Symposiums held in USA, China, India, Singapore, Taiwan, Malaysia, Indonesia and others. He is a member of the Steering Committee, HPC (High Performance Computing) Asia. He has received a Defence Technology Team Prize (1998) and the prestigious Royal Aeronautical Prize (1980, UK). Among other numerous and academic and professional duties, he is the Associate Editor of Communications in Computational Physics (CiCP) and Advances in Applied Mathematics and Mechanics (AAMM), and is on the Editorial Board of American Journal of Heat and Mass Transfer, Ocean Systems Engineering (IJOSE), International Journal of Intelligent Unmanned Systems (IJIUS), The Open Mechanical Engineering Journal (OME) and The Open Ocean Engineering Journal.

In research, BC‘s interest are in:

He is the PI of numerous externally funded projects including those from the Defense agencies like ONR/ONR Global and MINDEF (Singapore) to simulate/study the dynamics of underwater explosion bubble(s), flow supercavitation and detonation physics.