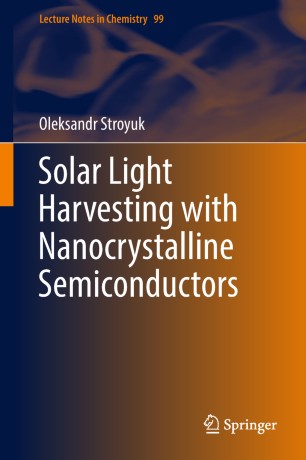 This book explains the use of nanocrystalline semiconductors in the harvesting of energy from solar light. It introduces promising methodology and technology which may help to increase the efficiency of light harvesting – one of the major challenges on the way toward sustainable energy generation.
The book starts with a general introduction to the photochemistry of semiconductor nanocrystals. In the introductory chapter, the author also provides a frank and critical discussion on perspectives and limitations of the photocatalytic processes for solar light conversion including a historical account on semiconductor photocatalysis. He discusses that (and also why) it is a long way from laboratory prototypes to real sustainable technologies.
The following chapters outline the conversion of solar light energy in semiconductor nanophotocatalysis on the one hand, and to (electric) energy in nanocrystalline semiconductor-based solar cells on the other hand. Topics addressed include nanophotocatalytic hydrogen production, artificial photosynthesis, quantum-dot sensitized liquid-junction and bulk heterojunction solar cells. Perspectives and opportunities, but also bottlenecks and limitations are discussed and the novel systems compared with established technology, such as classical silicon solar cells.
While readers in this way learn to understand the basics and get introduced to the current research in the field, the final chapter provides them with the necessary knowledge about methodology, both in synthesis and characterization of semiconductor nanophotocatalysts and semiconductor nanomaterials, including examples for the practice of photocatalytic experiments and the studies of semiconductor-based solar cells.