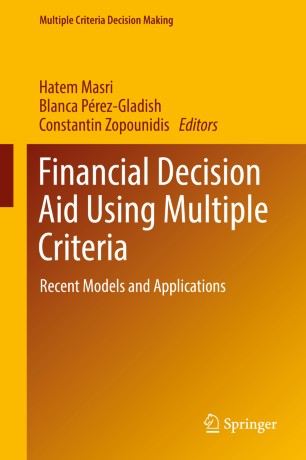 This volume highlights recent applications of multiple-criteria decision-making (MCDM) models in the field of finance. Covering a wide range of MCDM approaches, including multiobjective optimization, goal programming, value-based models, outranking techniques, and fuzzy models, it provides researchers and practitioners with a set of MCDM methodologies and empirical results in areas such as portfolio management, investment appraisal, banking, and corporate finance, among others. The book addresses issues related to problem structuring and modeling, solution techniques, comparative analyses, as well as combinations of MCDM models with other analytical methodologies.

Constantin Zopounidis is the Director of the Financial Engineering Laboratory. Prof. Zopounidis received his Doctorat D'Etat (1986) in management science, a D.E.A. (1982) in financial management from the University of Paris-IX Dauphine and a B.A. in Business Administration from the University of Macedonia.Prof. Zopounidis has been with the School of Production Engineering and Management of the Technical University of Crete, since 1987 and served as Chairman of the Department during the period 2001-2005.Prof. Zopounidis is elected member of the Royal Academy of Economc and Finance Sciences of Spain and Distinguished Research Professor at Audencia Business School, France. His research interests include financial engineering, financial risk management, and multiple criteria decision making. He has published over 450 papers in premier international journals, edited volumes, and conference proceedings. He has also published several books and edited volumes on financial engineering and operations research. Prof. Zopounidis is Editor-in-Chief and member of the editorial board of several international journals. For his research work, Prof. Zopounidis has received awards and honorary distinctions from international research organizations, including among others the ΜΟISIL International Foundation, the Decision Sciences Institute, the European Association of Management and Business Economics, the Royal Academy of Doctors of Spain, the Hellenic Operational Research Society, the International Association for Fuzzy Set Management and Economy, and the International MCDM Society.