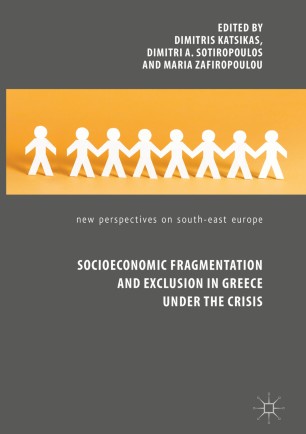 Socioeconomic Fragmentation and Exclusion in Greece under the Crisis

This volume uses new empirical evidence and analytical ideas to study phenomena of fragmentation and exclusion threatening stability and cohesion in Greek society in the aftermath of the crisis. The contributors argue that processes of fragmentation and exclusion provoked by the crisis can be observed on both a material and an ideational level. On a material level, rising levels of unemployment, poverty and inequality have produced new social security “outsiders”, while on an ideational level, a discursive-cultural shift is documented, which has led to new understandings and categorizations of new (and old) insiders and outsiders. Moreover,  the volume attests to the aspirations, but also the limitations, of spontaneous civil society mobilization to address the social crisis. Finally, the volume offers a discussion of the political management of social fragmentation and exclusion in Greece both before and after the onset of the crisis. The book will be of interest to scholars and students of social policy and phenomena of poverty, social exclusion and economic inequality, civil society studies, and comparative political economy and politics.

Dimitris Katsikas is Lecturer of International and European Political Economy at the National and Kapodistrian University of Athens and Head of the Crisis Observatory at the Hellenic Foundation for European and Foreign Policy (ELIAMEP), Greece.

Dimitri A. Sotiropoulos is Associate Professor of Political Science at the National and Kapodistrian University of Athens, Greece. He has published six books on Greek politics and society in Greek.

Maria Zafiropoulou works as an expert for the E.U. in healthcare and social issues and she is an active member of the Crisis Observatory at the Hellenic Foundation for European and Foreign Policy (ELIAMEP), Greece.