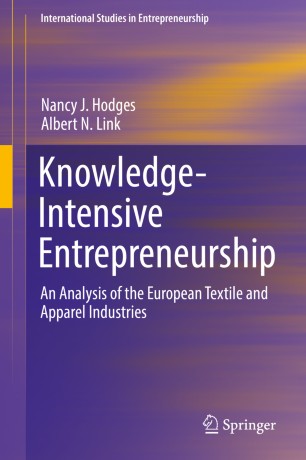 An Analysis of the European Textile and Apparel Industries

This book examines knowledge-intensive entrepreneurship (KIE) with a focus on the European textile and apparel industries. The primary purpose is to review the extant academic literature related to the European textile and apparel industries and reflect on that review empirically using a new and robust database on KIE to discover patterns between human capital and strategic entrepreneurial and innovative behavior.

According to the Advancing Knowledge-Intensive Entrepreneurship and Innovation for Economic Growth and Social Well-being in Europe (AEGIS) project, KIE is defined as an interface between knowledge generation and diffusion and the productive system. Knowledge-intensive entrepreneurs are thus involved in mechanisms that translate knowledge into innovation, which in turn leads to economic development and growth within an industry and/or region. To date, KIE is often associated with high-tech industries such as aerospace, computer engineering, automotive or telecommunications. For this reason, few studies have been conducted that specifically examine KIE as an avenue for firm or sector growth in the textile and apparel industries. However, new studies have positioned these industries as ones in which KIE can foster growth through innovation, and where products and processes are often evaluated within a knowledge-based framework. Building on this growing literature base, this volume explores potential policies and strategies for driving innovation and growth at the firm and industry levels in Europe and other regions, including the United States.

Nancy J. Hodges is the Burlington Industries Professor and Head of the Department of Consumer, Apparel, and Retail Studies (CARS) at the University of North Carolina, Greensboro (UNCG). Her research focuses on issues of higher education and employment relative to the US and North Carolina textile, apparel, and retail industries. She has published over 50 peer reviewed articles in scholarly journals including the Clothing and Textiles Research Journal, Family and Consumer Sciences Research Journal, and the Journal of Retailing and Consumer Services. She has presented her research at numerous juried national and international conferences, where she has received multiple awards for best research papers. She received the Outstanding Paper Award for 2010 from the Emerald Literati Network for one of her articles published in the Journal of Fashion Marketing and Management. She has garnered more than $1M in funds in support of her research, including a recently completed ten-year project supported by the NC Agricultural Research Service on the changing workforce of North Carolina’s textile sector. She is also the Project Director and Co-PI of two recently completed USDA Higher Education Challenge projects focused on investigating global industry issues and trends, including the link between higher education and industry employment.

Professor Hodges served as Director of Graduate Studies for the CARS program from 2004-2014, and has served as thesis or dissertation chair for more than 50 MS and PhD students, and advised more than 20 doctoral dissertations to completion. She has served as the Vice President for Planning for the International Textile and Apparel Association and is on the Executive Board of the Costume Society of America’s southeastern region. Professor Hodges has also served on the Editorial Board for the Clothing and Textiles Research Journal and is presently on the Advisory Board of Fashion Practice: The Journal of Design, Creative Process and the Fashion Industry. She is currently Associate Editor for the Clothing and Textiles Research Journal.

Professor Hodges has received several college and university awards, including college awards for Outstanding Teaching in 2003 and 2009. In 2010 she was the UNCG recipient of the UNC Board of Governors Teaching Excellence award. In 2012 she received the college Senior Research Excellence award. Most recently, she was awarded the 2013 Outstanding Mentor Award from The Graduate School of UNCG for her work advising and mentoring graduate students.

Albert N. Link is the Virginia Batte Phillips Distinguished Professor at the University of North Carolina at Greensboro (UNCG). His research focuses on entrepreneurship, technology and innovation policy, the economics of R&D, and policy/program evaluation. He is currently the Editor-in-Chief of the Journal of Technology Transfer.  He is also co-editor of Foundations and Trends in Entrepreneurship and founder/editor of Annals of Science and Technology Policy.

Professor Link’s public service includes being a member of the National Research Council’s research team that conducted the 2010 evaluation of the U.S. Small Business Innovation Research (SBIR) program. Based on that assignment, he later testified before Congress in April 2011 on the economic benefits associated with the SBIR program. Link also served from 2007-2012 as the U.S. Representative to the United Nations (Geneva) in the capacity of co-vice chairperson of the Team of Specialists on Innovation and Competitiveness Policies Initiative for the Economic Commission for Europe.

Link’s other public service has included being a member of the Advisory Panel to the National Aeronautics and Space Administration (NASA) on economic development strategies of Low-Earth Orbit and commercialization options for the International Space Station (2014-2015), a member of the Advisory Committee of the Canadian Institutes of Health Research (2011-2012), an advisor to National Governor’s Association on state-university-industry partnership programs (2007-2008), and a member of the White House Interagency Task Force on Internet Protocols (2003-2004).