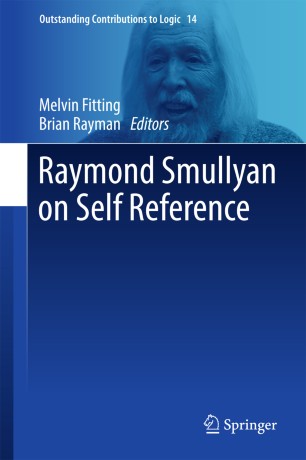 Raymond Smullyan on Self Reference

This book collects, for the first time in one volume, contributions honoring Professor Raymond Smullyan’s work on self-reference. It serves not only as a tribute to one of the great thinkers in logic, but also as a celebration of self-reference in general, to be enjoyed by all lovers of this field. Raymond Smullyan, mathematician, philosopher, musician and inventor of logic puzzles, made a lasting impact on the study of mathematical logic; accordingly, this book spans the many personalities through which Professor Smullyan operated, offering extensions and re-evaluations of his academic work on self-reference, applying self-referential logic to art and nature, and lastly, offering new puzzles designed to communicate otherwise esoteric concepts in mathematical logic, in the manner for which Professor Smullyan was so well known.

This book is suitable for students, scholars and logicians who are interested in learning more about Raymond Smullyan's work and life.

Melvin Fitting began his scientific career in 1968 and became Professor Emeritus in 2013, working for the entire time at the City University of New York. His work as a logician has included set theory, automated theorem proving, computer language semantics, and philosophical logic. Some of his books in these areas are well known, while others are not as well known as he would like. Following the example of his thesis advisor, Raymond Smullyan, retirement has not meant the end of a research career.

Profile Editor 2:
Brian Rayman works for New York City’s Department of Education. He holds Mathematics Education and Public Policy degrees from New York University and Columbia University, respectively. Since his days as an undergraduate, Brian has deeply embraced Professor Smullyan’s works in recreational mathematics and Eastern philosophy. As a high school mathematics teacher, he integrated Raymond’s work into his curriculum and invited him to speak to his students. Raymond kindly accepted and after two hours, students were no longer sure where mathematics ended and magic began, and vice versa. Today, he considers his most significant accomplishment as being counted among Raymond’s friends and performing magic tricks that nearly made Raymond’s eyes pop out. Brian lives in Carroll Gardens, Brooklyn, with his wife and two sons.