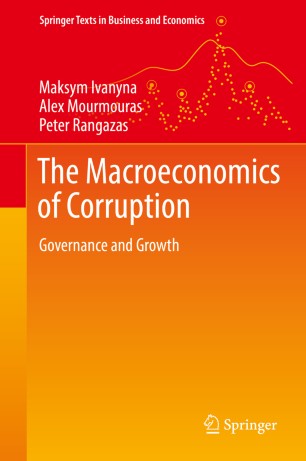 The Macroeconomics of Corruption

This textbook examines corruption through a macroeconomic lens, exploring the relationship between corruption, fiscal policy, and political economy. The book merges macroeconomic growth models with elements of political economic theory to address important applied topics such as income inequality within and across countries, growth slowdowns, and fiscal crises. Most of the basic ideas are illustrated using a two-period model of government investment that captures the future cost of policies that favor the present (Chapters 2-3).  The more subtle and advanced issues are illustrated and, in some cases, quantified, using the overlapping-generations model of economic growth (Chapters 4-6). The models used to illustrate the mechanisms of economic growth are extended to incorporate politics and the behavior of public officials (Chapters 3, 5-7). The text concludes with a thorough discussion of policy reforms designed to address the issues discussed in earlier chapters. Intended for students familiar with intermediate-level economics, the book contains a technical appendix, including detailed explanations of each model, end-of-chapter questions and problems, and a complete solutions manual, making it ideal for self-study. Offering a unified explanation for the causes and consequences of government failure, fiscal crisis, and the needed policy reforms, this text is appropriate for advanced undergraduate and beginning graduate courses in macroeconomics, political economy, and public policy.

Maksym Ivanyna has been an Economist at the Joint Vienna Institute since June 2012. He holds a Doctor’s degree in Economics from Regensburg University (Germany).  He also obtained a Master’s degree in Mathematics from Lviv National University (Ukraine), and M.A. degrees in Economics from Central European University (Hungary) and Michigan State University (USA). Prior to joining the JVI, Maksym did a number of consultancy jobs and internships at the IMF, World Bank, German Institute for Development, European Centre for Minority Issues, and Centre for EU Enlargement. His research portfolio includes publications and working papers in the fields of development, growth, corruption, governance, fiscal federalism, taxation, technology adoption and innovation.