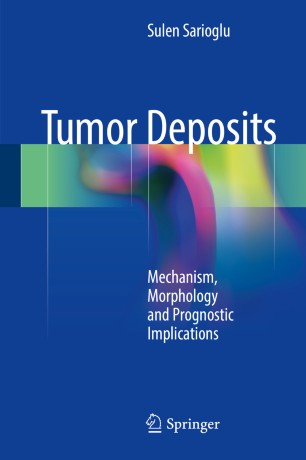 This book presents the morphology, possible mechanisms of formation, and clinical relevance of tumor deposits (TDs) in different organs and parts of the body. It also describes the diagnostic features that are currently available for TDs and discusses the prognostic impact of TDs. The poor prognostic and predictive values of TDs were found to be as strong as distant metastasis in different series.
TDs, best characterized by colorectal cancer, are irregular discrete tumor masses that are discontinuous from the leading edge of the tumor. However, even in colorectal cancers, the place of TDs in tumor staging (tumor, lymph node and distant metastasis categories) remains controversial. This book presents the possible mechanisms of TD formation, including neurotrophic and angiotrophic extravascular migratory metastasis, in comparison with the well-known mechanisms of metastasis. It also shows that TDs were identified in esophageal, gastric, salivary gland, head and neck, and breast carcinomas. The possible mechanisms leading to the frequent association of TDs and peritoneal carcinomatosis are discussed.
This is a valuable resource for pathologists, oncologists, and surgeons who are looking for detailed information on the latest scientific insights into the pathology and prognostic implications of TDs.

Professor Sulen Sarioglu graduated from the Ankara Science Lise (1982) and Hacettepe University Faculty of Medicine (1988), Turkey. Until 1992, she worked as a resident in pathology and qualified as a pathologist. From 1992 to 1994, she worked at the Department of Pathology at the Ankara Oncology Hospital, Turkey. In 1999, she developed her skills further at the University of Birmingham.  She has worked at Dokuz Eylul University Department of Pathology since 1994, where she has been head of department since July 2015 and a full-professor since 2002. Professor Sarioglu worked as associate medical director of the Dokuz Eylul University Hospital from 2000-2004.
She is a member of the European Society of Pathology and the Renal Pathology Society, and a member of the European Society of Pathology’s Head and Neck Pathology and Nephropathology working groups. She is the former Chair of the Turkish Federation of Pathology Societies Head and Neck Working Group (2008-2014), and of the Turkish Federation of Pathology Societies Information Technologies Working Group (2014). Professor Sarioglu is the author of three national scientific books, has edited two national books in pathology and has authored/co-authored more than 250 scientific publications.