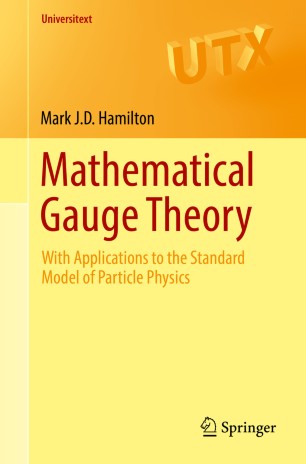 With Applications to the Standard Model of Particle Physics

The first part of the book covers the mathematical theory of Lie groups and Lie algebras, fibre bundles, connections, curvature and spinors. The second part then gives a detailed exposition of how these concepts are applied in physics, concerning topics such as the Lagrangians of gauge and matter fields, spontaneous symmetry breaking, the Higgs boson and mass generation of gauge bosons and fermions. The book also contains a chapter on advanced and modern topics in particle physics, such as neutrino masses, CP violation and Grand Unification.

This carefully written textbook is aimed at graduate students of mathematics and physics. It contains numerous examples and more than 150 exercises, making it suitable for self-study and use alongside lecture courses. Only a basic knowledge of differentiable manifolds and special relativity is required, summarized in the appendix.

Mark Hamilton has worked as a lecturer and interim professor at the University of Stuttgart and the Ludwig-Maximilian University of Munich. His research focus lies on geometric topology and mathematical physics, in particular, the differential topology of 4-manifolds and Seiberg-Witten theory.

“Assuming an introductory course on differential geometry and some basic knowledge of special relativity, both of which are summarized in the appendices, the book expounds the mathematical background behind the well-established standard model of modern particle and high energy physics… I believe that the book will be a standard textbook on the standard model for mathematics-oriented students.” (Hirokazu Nishimura, zbMATH 1390.81005)
Buy options