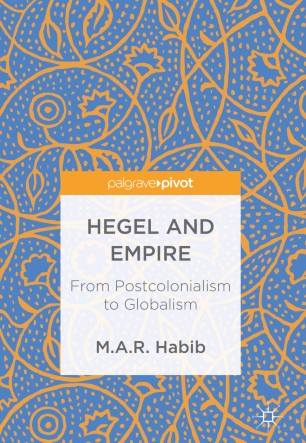 From Postcolonialism to Globalism

This book provides a clear and nuanced appraisal of Hegel’s treatment of Africa, India, and Islam, and of the implications of this treatment for postcolonial and global studies. Analyzing Hegel’s master-slave dialectic and his views on Africa, India, and Islam, it situates these views not only within Hegel’s historical scheme but also within a broader European philosophical context and the debates they have provoked within Hegel scholarship. Each chapter explores various in depth readings of Hegel by postcolonial critics, investigating both the Eurocentric and potentially global nature of his dialectic. Ultimately, the book shows both where of this profoundly influential thinker archetypally embodies certain Eurocentric traits that have characterized modernity and how, ironically, he himself gives us the tools for working towards a more global vision.

Offering a concise introduction not only to an important dimension of Hegel’s thought – his orientation towards “empire” – but also to the various issues raised by postcolonial theory and global studies, this book will be of use to philosophers as well as advanced students of literary and cultural theory alike.