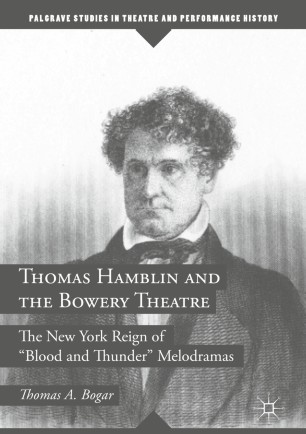 The New York Reign of "Blood and Thunder” Melodramas

This book recounts the personal and professional life of Thomas Souness Hamblin (1800-1853), Shakespearean actor and Bowery Theatre manager. Primarily responsible for the popularity of “blood and thunder” melodramas with working class audiences in New York City, Hamblin discovered, trained and promoted many young actors and, especially, actresses who later became famous in their own right. He also epitomized the “sporting man” of mid-nineteenth century life, conducting a scandalous series of affairs and visits to Manhattan brothels, which cost him his marriage to Elizabeth Blanchard Hamblin (1799-1849) and made him the brunt of moralist, religious and journalistic crusades, notably that of James Gordon Bennett’s New York Herald. His machinations and perseverance through trying challenges, including several destructions of the Bowery Theatre by fire, extensive financial and legal complications, and the untimely deaths of several young protégées, earned him equal measures of admiration and opprobrium.

Thomas A. Bogar taught theatre history, dramatic literature, and theatrical production for forty years. He holds a Ph.D. in theatre history, literature and criticism from Louisiana State University, USA. He is the author of Backstage at the Lincoln Assassination, American Presidents Attend the Theatre and a biography of actor-manager John E. Owens. He is the recipient of two National Endowment for the Humanities fellowships, and served as a judge for Washington’s Helen Hayes Theatre Awards. He lives in Silver Spring, Maryland.