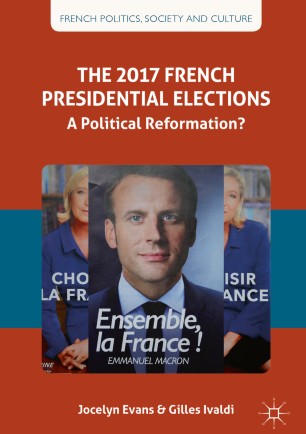 Emmanuel Macron’s victory in the 2017 presidential elections represents one of the most important disruptions to French political life since the establishment of the Fifth Republic. This book analyses the political opportunities enabling a neophyte to conquer the Elysée, and the conditions leading to the unprecedented presidential runoff between this centrist EU enthusiast and pro-globalization candidate and the nationalistic/populist alternative embodied by Marine Le Pen. The book begins by considering trends in party competition and presidentialism in modern France, notably presidential primaries and their impact on party competition. It then moves to considering the role traditional explanatory factors in elections, namely policies and voter profiles, played in the result. Finally, it examines the dynamics of President Macron’s success in the legislatives, and how he dominated the traditional party blocs. This book will appeal to students of French politics as well as those interested in electoral behaviour and European political systems.

Jocelyn Evans is Professor of Politics at the University of Leeds, UK. He has written widely on aspects of voting behaviour and political parties in France, the UK and comparatively. He served as editor of Parliamentary Affairs between 2005 and 2011. He has held visiting research positions at the ZA-Eurolab in Cologne, Germany, and the CIDSP, Grenoble, France.

Gilles Ivaldi is Researcher in Political Science with the National Centre for Scientific Research (CNRS) at URMIS-University of Nice, France. His main fields of research include French politics, elections, and the comparative study of populist parties, left and right. He has published extensively on those areas of research in academic journals.

“The introduction sets the election in a wider context that even readers with no real knowledge or particular hankering for French politics should find easy enough to absorb. … This is an essential book for anyone teaching French politics today--all the more so since textbooks in the broader field have become thin on the ground. It is certainly a must have for university libraries.” (Paul Smith, H-France Review, Vol. 19 (36), March, 2019)