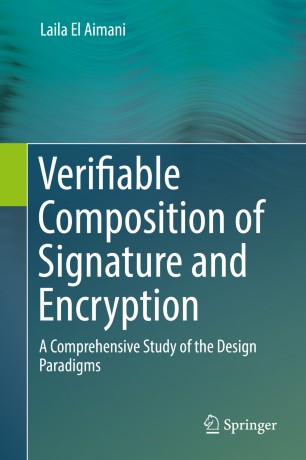 Verifiable Composition of Signature and Encryption

A Comprehensive Study of the Design Paradigms

This monograph gives a thorough treatment of the celebrated compositions of signature and encryption that allow for verifiability, that is, to efficiently prove properties about the encrypted data.

This study is provided in the context of two cryptographic primitives: (1) designated confirmer signatures, an opaque signature which was introduced to control the proliferation of certified copies of documents, and (2) signcryption, a primitive that offers privacy and authenticity at once in an efficient way.

This book is a useful resource to researchers in cryptology and information security, graduate and PhD students, and security professionals.

Laila El Aimani is researcher in cryptology and assistant professor at Cadi Ayyad University, Morocco.
In 2011, she graduated from Universität Bonn (Germany) as a Dr.rer.nat under the supervision of Joachim von zur Gathen. A good part of her PhD research was dedicated to the design and analysis of privacy-preserving mechanisms (e.g. undeniable/confirmer signatures, signcryption).
Later, she joined the Security Labs of Technicolor (France) as a research engineer in security and privacy. After a short sojourn in Gemalto (France) in 2013, she joined the computer science department of Cadi Ayyad University (Morocco) as a researcher and assistant professor.
Laila filed three patents on applied cryptology, and co-authored several research papers on cryptology/security.