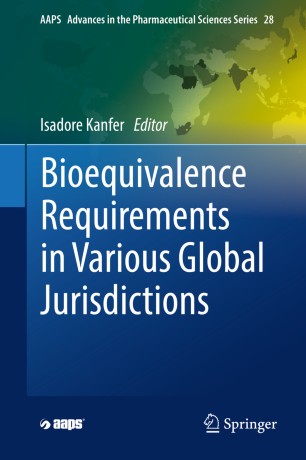 Although the Bioequivalence (BE) requirements in many global jurisdictions have much in common, differences in certain approaches and requirements such as definitions and terms, choice of comparator (reference) product, acceptance criteria, fasted and fed studies, single and multi-dose studies, biowaivers and products not intended for absorption into the systemic circulation (locally acting medicines and dosage forms), amongst others, provide food for thought that standardisation should be a high priority objective in order to result in a harmonized international process for the market approval of products using BE. An important objective of Bioequivalence Requirements in Various Global Jurisdictions is to attempt to gather the various  BE requirements used in different global jurisdictions to provide a single source of relevant information. This information from, Brazil, Canada, China, European Union, India, Japan, MENA, Russia South Africa, the USA and WHO will be of value to drug manufacturers, regulatory agencies, pharmaceutical scientists and related health organizations and governments around the world in the quest to harmonize regulatory requirements for the market approval of generic products.

Dr. Kanfer has supervised 51 postgraduate students (MSc & PhD) and post-doctoral fellows in Pharmaceutical Sciences. He has contributed to over 200 research publications and conference presentations and is co-editor of 4 books in the series, Generic Drug Product Development.

nataka, India. He is currently a Professor at the Leslie Dan Faculty of Pharmacy, University of Toronto, Canada.