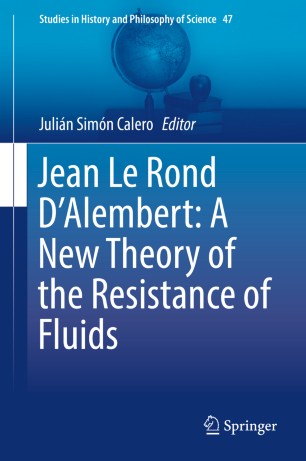 Jean Le Rond D'Alembert: A New Theory of the Resistance of Fluids

Part of the Studies in History and Philosophy of Science book series (AUST, volume 47)

In the commentaries to this book we try to understand d’Alembert thoughts and how he contrives to translate his ideas on mechanics to the fluid realm with a new and radical point of view; how he arrives at the first two fundamental differential equations among the velocity components; and how he tries to reduce the resistance of a moving body, which is a change of its momentum, to the hydrostatical pressure, which is related to the gravity. All this knowing that his mechanics has no forces and no pressures as well, and that the fluids are aggregates of individual particles.

The essay A New Theory of the Resistance of Fluids was a turning point in Fluid Mechanics because clearly, for the first time, the resistance is shown as the results of a fluid subjected to differential equations in a continuous mode instead of a set of impacts of individual particles. This contribution has been recognized by the scholars. However, only partial attention has been paid to this work, which can be justified due to the difficulty in its reading and also because it was eclipsed by the publication, a few years later, of Euler’s three Memoirs that established modern hydrodynamics.