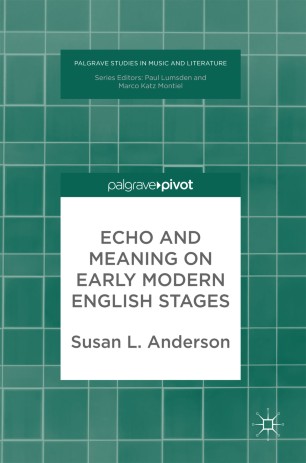 This book examines the trope of echo in early modern literature and drama, exploring the musical, sonic, and verbal effects generated by forms of repetition on stage and in print. Focusing on examples where Echo herself appears as a character, this study shows how echoic techniques permeated literary, dramatic, and musical performance in the period, and puts forward echo as a model for engaging with sounds and texts from the past. Starting with sixteenth century translations of myths of Echo from Ovid and Longus, the book moves through the uses of echo in Elizabethan progress entertainments, commercial and court drama, Jacobean court masques, and prose romance. It places the work of well-known dramatists, such as Ben Jonson and John Webster, in the context of broader cultures of performance. The book will be of interest to scholars and students of early modern drama, music, and dance.

Susan L. Anderson is Principal Lecturer in English at Sheffield Hallam University. She has published widely on on interdisciplinary approaches to a range of early modern performance genres. Her research also examines disability and representations of difference in Shakespearean drama. She is a trustee of the British Shakespeare Association.