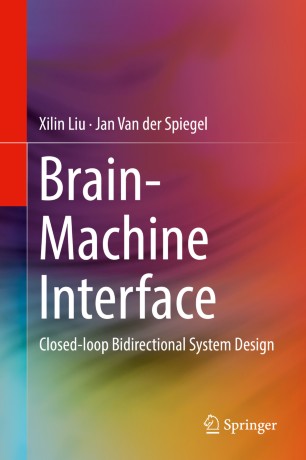 This book provides an introduction to the emerging area of “Brain-Machine Interfaces,” with emphasis on the operation and practical design aspects. The book will help both electrical & bioengineers as well as neuroscience investigators to learn about the next generation brain-machine interfaces. The comprehensive review and design analysis will be very helpful for researchers who are new to this area or interested in the study of the brain. The in-depth discussion of practical design issues especially in animal experiments will also be valuable for experienced researchers.
ace; many innovations in the circuit design optimized for the characteristics of neural interface and electrode-electrolyte interface.

Xilin Liu received the B.S. degree in Electrical Engineering from the Harbin Institute of Technology, China, in 2011. He received the M.S. and the Ph.D. degrees in Electrical Engineering from the University of Pennsylvania in 2013 and 2017, respectively. He joined Qualcomm Inc. in 2017. His research interests include analog and mixed-signal integrated circuits and system design for medical applications, brain-machine interface, data converters, and CMOS sensors.

His primary research interests are in mixed-mode VLSI design, bio-inspired CMOS vision sensors, biologically based image sensors and sensory information processing systems, and brain-machine interface electronics. He has published over 2

50 journal and conference papers, and is the co-author of 8 U.S. patents.

He is a life fellow of the IEEE, received the IEEE Major Educational Innovation Award, and is the recipient of the IEEE Third Millennium Medal, the UPS Foundation Distinguished Education Chair and the Bicentennial Class of 1940 Term Chair. He received the Christian and Mary Lindback Foundation, and the S. Reid Warren Award for Distinguished Teaching, the IBM Young Faculty Development Award and the Presidential Young Investigator Award. He has served on several IEEE program committees (IEDM, ICCD, ISCAS, and ISSCC) and was the technical program chair of the 2007 International Solid-State Circuit Conference (ISSCC 2007).

former Editor of Sensors and Actuators A for North and South America.

He has been the chair of the IEEE SSCS Chapters committee from 1998 to 2015. He is currently the President of the IEEE Solid-State Circuits Society. He is a member of Phi Beta Delta and Tau Beta Pi. He spent a six-month sabbatical at Tsinghua University, Beijing, as a distinguished visiting scholar in 2017-2018.