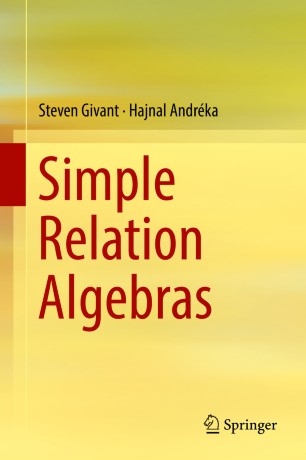 This monograph details several different methods for constructing simple relation algebras, many of which are new with this book. By drawing these seemingly different methods together, all are shown to be aspects of one general approach, for which several applications are given. These tools for constructing and analyzing relation algebras are of particular interest to mathematicians working in logic, algebraic logic, or universal algebra, but will also appeal to philosophers and theoretical computer scientists working in fields that use mathematics.

The book is written with a broad audience in mind and features a careful, pedagogical approach; an appendix contains the requisite background material in relation algebras. Over 400 exercises provide ample opportunities to engage with the material, making this a monograph equally appropriate for use in a special topics course or for independent study. Readers interested in pursuing an extended background study of relation algebras will find a comprehensive treatment in author Steven Givant’s textbook, Introduction to Relation Algebras (Springer, 2017).

Steven Givant is a Professor of Mathematics and Computer Science at Mills College, California. As a long-term collaborator of Alfred Tarski—one of the great logicians—Givant has been involved first-hand in the development of the field of relation algebras since the 1970s. His other books include Introduction to Relation Algebras and Advanced Topics in Relation Algebras (Springer, 2017), Duality Theories for Boolean Algebras with Operators (Springer, 2014), Introduction to Boolean Algebras, with Paul Halmos (Springer, 2009), Logic as Algebra, with Paul Halmos (MAA, 1998), and A Formalization of Set Theory without Variables, with Alfred Tarski (AMS, 1987). He was also a coeditor, with Ralph McKenzie, of the collected papers of Alfred Tarski (Birkhäuser, 1986).

Hajnal Andréka is a Professor of Mathematics at the Alfréd Rényi Institute of Mathematics in the Hungarian Academy of Sciences. She has been a prominent figure in the development of relation algebra theory since the 1970s and won the prestigious Alfréd Rényi Prize in 1987. Her other books include Universal Algebraic Logic, with István Németi and Ildikó Sain (Birkhäuser, 2017), Decision Problems for Equational Theories of Relation Algebras, with Steven Givant and István Németi (AMS, 1997), and Cylindric Set Algebras, with Leon Henkin, J. Donald Monk, Alfred Tarski, and István Németi (Springer, 1981).