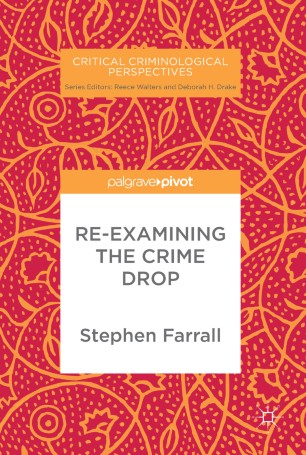 The crime drop is one of the most important puzzles in contemporary criminology: since the early-1990s many countries appear to exhibit a pronounced decline in crime rates. While there have been many studies on the topic, this book argues that the current crime drop literature relies too heavily on a single methodological approach, and in turn, provides a new method for examining the falling rates of crime, based on ideas from political science and comparative historical social science.
Farrall’s original new research forwards an understanding of trends in crime and responses to them by questioning the received theoretical assumptions. The book therefore encourages a ‘deepening’ in the nature of the sorts of studies which have been undertaken so far. Firmly grounded in Political Science, this innovative study is a must read for scholars of Critical Criminology, Criminological Theory, and Politics.

Stephen Farrall is Professor of Criminology in the Centre for Criminological Research at the University of Sheffield, UK.

“Farrall … examines the theoretical and empirical dimensions of political scientists' efforts to assess how political processes engage ‘crime drops’ (or reductions in crime). In this engaging account, Farrall focuses primarily on England and Wales but compares his assessment with occurrences and research in Australia, New Zealand, Sweden, and the United States.” (Journal of Community Corrections, Vol. 28 (1), Fall, 2018)“Stephen Farrell offers a thoughtful and informed critique of the assumptions and methods that characterize studies of the contemporary crime drop. No one should ignore his important recommendation to analyze the crime drop in the historical context of the nations where it has occurred.” (Richard Rosenfeld, University of Missouri - St. Louis, USA)
Buy options