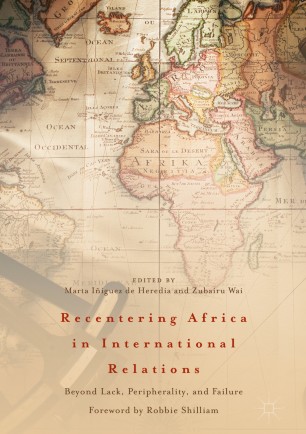 Beyond Lack, Peripherality, and Failure

This innovative book responds to an existing demand for taking Africa out of a place of exception and marginality, and placing it at the center of international relations and world politics. Bringing together a number of scholars from various disciplinary backgrounds to stage a critical intervention into the problematic ways Africa is accounted for in the dominant discourses of international relations and global politics, it challenges the structural and epistemic biases of IR that render the contributions of the continent invisible, and situates the continent as a global region that exists beyond notions of lack, disorder, and failure. Through these interventions, the volume contributes to a rethinking of IR, and the conditions of possibility for imagining a world otherwise beyond frames that fetishize Africa paradoxically as transparent and invisible.
Marta Iñiguez de Heredia is Marie-Sklodowska Curie Fellow at the Institut Barcelona d’Estudis Internacionals, Pompeu Fabra University, Spain.
​Zubairu Wai is Associate Professor of Political Science at Lakehead University, Canada.