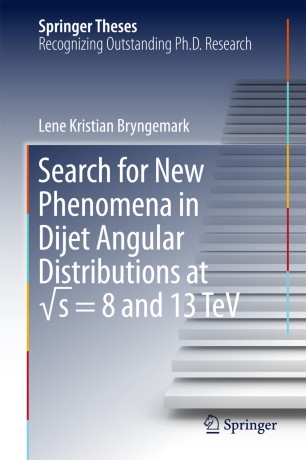 This thesis describes the use of the angular distributions of the most energetic dijets in data recorded by the ATLAS experiment, at CERN’s Large Hadron Collider (LHC), the goal of which is to search for phenomena beyond what the current theory of Particle Physics (the Standard Model) can describe. It also describes the deployment of the method used in ATLAS to correct for the distortions in jet energy measurements caused by additional proton–proton interactions.

The thesis provides a detailed introduction to understanding jets and dijet searches at the LHC. The experiments were carried out at two record collider centre-of-mass energies (8 and 13 TeV), probing smaller distances than ever before. Across a broad momentum transfer range, the proton constituents (quarks and gluons) display the same kinematical behaviour, and thus still appear to be point-like. Data are compared to predictions corrected for next-to-leading order quantum chromodynamics (NLO QCD) as well as electroweak effects, demonstrating excellent agreement. The results are subsequently used to set limits on parameters of suggested theoretical extensions to the Standard Model (SM), including the effective coupling and mass of a Dark Matter mediator.